I've never listened to Children of Bodom before. As I say with many of the bands I've never actually listened to before, I should probably do so, for my own good. Representing a massive gap in my knowledge, Children of Bodom were probably one such neglected band that I should have listened to quite soon, considering just how well known they are. Fortunately, as I write out this ponderous intro-paragraph, that's what I've been doing. 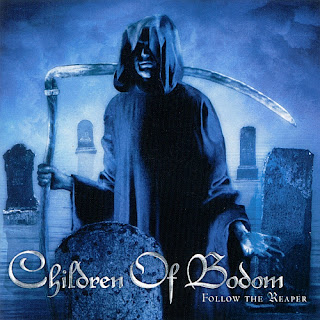 If you'd asked me not so very long ago what Children of Bodom sounded like, I'd have probably answered along the lines of "ehh... melodic-death metal kind of stuff?" As it turns out, I wasn't too far off. This album in particular seems to sit somewhere between melodic death metal and power metal, with fairly caustic, but at the same time tuneful, harsh vocals, a melodeath staple, and indeed quite a heavy guitar tone, but also sparkling, dancing keyboard playing, which gives the music a very melodic, uplifting and almost fairytale sound in places, which I'd imagine is where the power-metal element comes in. The synth itself has quite a classical feel in places, and is certainly indicative of quite a lot of dexterity on the keyboard player's part. At times, it also has something of a folk-influenced sound, which was an interesting twist upon what I was expecting. What emerges when these elements are combined is undeniably very accessible, and highly-polished, but certainly isn't bad - It's enjoyable and catchy, and is certainly honest-to-goodness metal. The synth tends to lead the music, with the guitar work taking a back-seat for the most part - not subdued so much as simply allowing the synth to vend all of the "catchy bits" for a good two-thirds of the time.

When the lead guitar does take it's place in the spotlight, it's very adequate, and at times impressive - there is a reasonable collection of both lead-sections and solos - modern sounding, with pristine production and smoothness, as if the very music itself was crafted from porcelain, but effective nonetheless - generally I enjoy guitar work with a bit of a rough-edge, and that goes for music in general too, when it comes to it, but I find the sharpness of this album quite unobtrusive, and enjoyable. The riffs, too, have a degree of substance, and there are a few which are very enjoyable in their own right, without relying on the syrupy synth coating which everything has - My knowledge of melodic death metal, and, for that matter, power metal, isn't quite up to scratch at times, so I often don't know what sounds "normal" for a genre, but the riffs in this album seem to bring into play traditional metal and thrash-influences, and do so often, with the former introducing some subtle, almost rock-like sections tucked in beneath the synth and lead-work, and the latter making itself felt when the songs thunder along, with power-chord driven, galloping riffs often somewhat reminiscent of modern thrash.


This is roughly what I was expecting, when I set out to listen to the band - but on the whole I've enjoyed it more than I suspected I might - I don't tend to be a melodic death metal fan, but this was a pleasant listen, and was certainly easier to listen to, and more memorable, than some of the things which I consider myself to love. If music could be bottled, this should be given to scene-kids, and labeled "The antidote to metalcore".