#383 The Ruins of Beverast - Rain Upon the Impure

The Ruins of Beverast have been something of a stand-out band of the black metal scene over the last decade or so, offering a unique take on the darkness and atmospheric elements present in the genre - and if you're skimming through, I dare suppose that praise summarises this review as a whole. In the process, the band has created some of the most thick, substantial and successfully ambitious records the genre has ever seen, whilst at every hurdle succeeding in avoiding the trappings of gratuitousness, pretentiousness and insincerity. Whilst I could have reviewed any of the bands four full-length albums happily, my focus today falls on "Rain Upon the Impure", which, as my introduction to the band at the start of this year, cements it as one of their most significant works, in my mind. By coincidence as much as anything else, it also appears to be one of their most highly regarded works throughout the community at large. 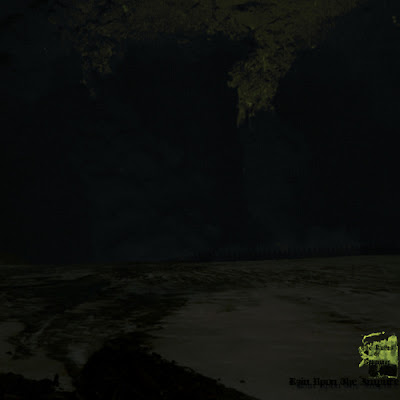 "Rain Upon the Impure" is 79-minutes long. Not because that's about as much as you can fit on a CD, nor out of any pretentiousness; the album is not needlessly extended, but is such a sonic leviathan  because it needs to be. It works that way. The record is as a vast set of catacombs, in which the listener is engulfed and overwhelmed by its murkiness and vast, sprawling scale. Through the gloom, sublimely absorbing choral atmospherics ensnare and widen the eyes; a surreal descent through vast subterranean ritual halls. None of the run-time is wasted; all contributing to the individual beauty and atmosphere of its moments and tracks, while also forming a rich and cohesive whole; an album which, despite having a length which could easily be considered to be "hard work", nonetheless feels healthy and well utilised. The whole thing drips and oozes with atmosphere, cavernous but coherent, superbly composed and constructed as it churns and undulates. The crawling, pulsating soundscape lures the listener into a darkness which to the untrained ear may resemble that which many black-metal records can conjure, but which is nonetheless different. In a genre where albums often take the listener to unusual places, The Ruins of Beverast take the listener to somewhere before unexplored. While the occult atmosphere carries a striking familiarity - that's easy enough to grant - it also takes the black metal sound to Cyclopean subterranean depths to create something which no other band seems to.

The hazard which often befalls albums with extremely long songs - or simply long albums - is that of songs meandering purposelessly, or outliving their welcome. Through one factor or another, this simply does not appear to be true of "Rain Upon the Impure". Looking at a piece such as the album closing title-track reveals a 14-minute behemoth of a song in which every second is nonetheless utilised; lean and mean, but nonetheless enormous. Perhaps to reiterate the above, much about the album is so vast because it needs to be. It's a testament to strong song-writing ability to create a record of such magnitude with very few, if any, moments which leave the listener idle or bored of the soundscapes being offered up. As well as being compositionally impressive, "Rain Upon the Impure" demonstrates equally impressive musicianship; the drumming hits a level in terms of precision, technique and endurance which most black-metal drummers can only dream of, resulting in a deeply pleasing percussive integrity and intensity throughout. The choices with regards to guitar tone, sampling, and vocal-style all also collaborate excellently in the mission of rendering the album magnificent in its execution, whilst simultaneously avoiding many of the production-related follies which befall most one-man projects. Indeed, the testimony of my ears to my mind suggests that the record is one with very, very little wrong with it at all.


"Rain Upon the Impure" is truly a record of advantage without disadvantage. Vast without being bloated, unusual and bizarre without being comical or excessive. Crushing without sacrificing clear and potent production values... the list goes on. The record is an epic one in the earnest and meaningful sense of the word. For my money, it deserves to be held aloft aside almost any of the very best that the last ten years has to offer - within black metal, extreme metal in general, or even metal as a whole.