I got into Black Breath just as "Sentenced to Life" came out, back in early 2012. Among other things, it was the first time I'd ever heard a HM-2 guitar tone used, which definitely played a part in how incredibly blown-away I was by how monstrous it sounded. Of course, several years later, I've heard plenty more bands utilising that classic Swedish sound  - many of them actually from Sweden - but my appreciation of Black Breath's work has not been diminished by a grown understanding of the musical context within which they exist. In fact, it has been quite the opposite; both of the band's full-length albums are still among the records I listen to the most. Another, perhaps more relevant side-effect of discovering the band just after the release of "Sentenced..." is that it's the longest time I could possibly have waited for a new album - and consequently, the prospect of "Slaves Beyond Death" was an exciting one indeed... 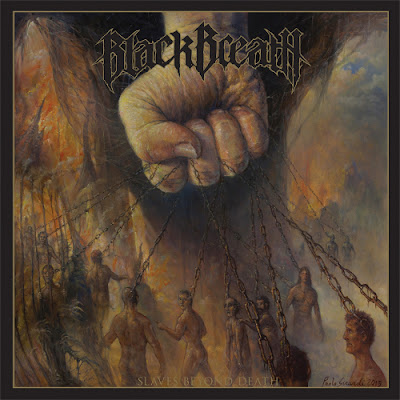 Before tackling the meat of the album - in short, what it sounds like - some words about artwork are needed. Paolo Girardi is an extremely talented artist - much in the way that Christophe Szpajdel is a great logo designer. Both suffer from the same problem; a lot of their output looks more or less the same. While all of Girardi's artwork is very accomplished, its often limited palette and thematic content leaves the artwork of "Slaves Beyond Death" just another beige cobblestone on a road paved by his work. It's also unclear how well it suits the bands ethos and sound; lacking in the appropriate sharpness and power to evoke the band's music. The idea itself is a powerful one, but could have been executed better. Of course, the sway of the aesthetic element of a record is generally outweighed by the musical one - and so it would be wise to swiftly move along to that. "Slaves..." is a solid, if slightly confusing, listen. The record is much less compact than its predecessors - more sprawling, arguably more ambitious, and, consequently, sometimes less intense. The songs are substantially longer - at times granting the music more room in which to make its impact, but often leaving them feeling diluted, and at its worst, haphazardly arranged; several tracks reek slightly of the gratuitous; their intros feel like they have intros - we're 01:35 into the song now, are we quite done? The bursts of energy are slathered and tarred in mid-tempo riffs - sometimes to the point of weariness. The production feels more blunt; the vocals quieter - in striving to be more evil and more - for want of a better word "proper" as opposed to the unrefined roaring in previous records, they lose quite a bit of impact, both in the mix, and overall in their delivery. Likewise, the guitar work can come across as a little bit neutered of the extreme heaviness found previously, even if, and I'm more than happy to admit, the riffs still truly ooze with skull-splitting heaviness, which, for all the criticism I just delivered, is still true.

Nonetheless, despite all that I've just said, I'm not as displeased as it might seem. I did enjoy Slaves Beyond Death, but it's certainly an enjoyment tinged with surprise - the record represents a pronounced change in direction, and, perhaps bravely, perhaps foolishly, a step away from the sheer intensity which, as far as I understood it, was Black Breath's thing. At times the record steps up to the familiar strobe-lit Armageddon that the band traditionally deliver - but chiefly, the shattering glass and wide-eyed abandon evoked previously now has as an accomplice a fair bit of experimentation with the grandiose, with the obtuse and the vast interlaced into it - and while it would be overly harsh to call it "experimentation gone wrong", it doesn't make it past "experimentation gone... okay" in my eyes, at least if I try to compare it strictly to the previous records. Maybe the story behind all of this is simply thus; maybe records like "Heavy Breathing" and "Sentenced to Life" are beyond replication? Maybe the band thought so, at least. Maybe the band thought that recipe had run its course - and I find this most plausible... but I dare say a lot of us didn't feel like it had run that course just yet. Whatever the reason, "Slaves..." is a very different record to what came before, and one which makes it challenging to listen to; the question of what to look for in the labyrinths of its sound is ambiguous; to understand it in the paradigm of the Black Breath of old is to be disappointed - but to understand it, or attempt to, with regards to its own, isolated merits reveals a competent and enjoyable record - not the record I expected, or, indeed, quite the record I wanted, but nonetheless one that bears at least most of the marks of being a good one. Wherever the bands sound is destined - and with an eye to where it came from, I think "Slaves..." is destined to be viewed as a transitional work, and perhaps, with time, one which might become viewed as underrated.


"Slaves Beyond Death" is a worthwhile album - that's still absolutely true. Approached with an open mind, it's solid stuff, and maintains a degree of the captivating genre-ambiguity which the previous records had. A change in style, for sure, but not so drastic as to fall dead from the presses. It will disappoint some, be met with indifference by others, but, for the most part, meet with a reasonable level of approval, I expect. Different, and a bit of a shock to those expecting or hoping for "more of the same" - but not the sort of shock which ruins the album. I'm already looking forward to the next record - not least so I can say I "called it" if this one proves to be a transitional work.