Solstheim are a black-metal outfit from Scotland, and, as chance would have it, I was getting quite tempted to review their début EP before I offered to do so in response to a Facebook post. It's a small world, although the fact that I'm at roughly the same end of the same country as them maybe detracts from the wonder slightly. Nonetheless, I took a look at the EP, not entirely certain what to expect, other than some form of black-metal. 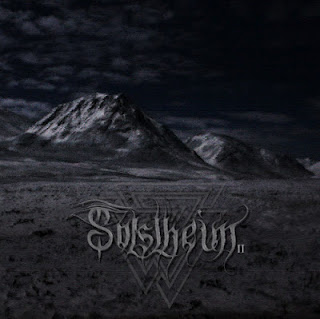 An intro-track off an ambient style, I find, is often an indication that an EP has been assembled with a degree of care and consideration. The one on this EP seems quite well done, and certainly sets the rest of the material up to be dark and frosty, which, following on from the intro neatly, it is. The rest of the EP is heavily, but not excessively, symphonic - I'd compare it to Enslaved or Emperor, but it seems to sit fairly neatly in the middle, with the icy grandiose feel of the latter but blended with the occasional chunky, -early-mid-era Enslaved style riff. This has the effect of making the guitar a lot less "wall of sound" in character than a lot of black metal of a similar vein, because while there are often tremolos and held chords making the guitar primarily a source of tone to go with the synth, the EP also has plenty of crunchy and rhythmic riff-work. Some of it doesn't quite sound like typical black-metal at all,  for instance, at one point I heard a thrashy, triplet based riff which reminded me a bit of Iced Earth. I don't find this, however, to be a bad thing; the injections of differing style and influence infuse the EP with a great sense of variety, and what's more, it really makes the songs memorable - It's nice to see a band who remember that black-metal doesn't have to be a wall of incessand blast-beats, and that other things are, in fact, allowed.

The low, Nordic sounding synth-work gives the album a very crushing, austere feel, remorseless, and perhaps a little less "twiddly", for want of a better word, than the style of synth which bands like Emperor use. Solstheim certainly have a sound which is lower and more visceral. The vocals, in addition to the synth are particularly angry and malignant, imbued with a sense of rage, perhaps even madness,  which definitely counts further towards the malign atmosphere. To be considerably more concise, the dark, brooding hills on the EP's artwork really embody what the music sounds like. The rough edges of the music in the production department actually improve the EP for me - I've always preferred symphonic black-metal to be a little bit raw, with bands like Gehenna being an example. Solstheim seem to get a fine balance between being clear and crisp enough to keep the grandiose edge, but also being raw enough to have charm, and not seem overly plastic-sounding or overproduced.

This is certainly a well-formed, solid EP, and I'm actually quite interested to see what the band do next. It's nice to hear non-flowery symphonic black-metal, and I'm not afraid to say that Solstheim do it well. I'll be dowloading this on Bandcamp, and I suggest that you do the same.

Links:
Solstheim on Bandcamp
Solstheim on Facebook
Solstheim on Myspace
Solstheim were, eventually, rightfully accepted onto Metal Archives. I believe after a considerable amount of swearing.