It's always nice to have an internal monologue. When it come to writing reviews, mine frequently interrogates me as to why there are so many bands which I really aught to have reviewed by now. Anthrax is one such band, especially considering that thrash is one of my favourite sub-genres of metal, and I try to review an especially broad range of such bands. I've chosen "Persistence of Time" as an album to review because it's not one of the band's biggest, but still very much amounts to part of the band's classic era - a healthy balance. 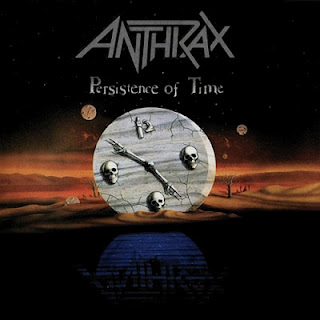 What the Persistence of Time album offers the listener is a more polished and complex incarnation of the band than could be seen on some of the previous albums. Don't get me wrong, the band have always been aware and alert, but it's particularly apparent on albums like this. Fortunately, the music isn't so busy being fancy and moulding the conventions of thrash metal that it forgets to be just that, thrash. This album has as much energy and thrash metal grit than anything which the band had done previously, rendering the sound which emerges rather enjoyable, with the thundering, memorable riffs which the band are masters of, and refreshingly melodic and catchy vocals, arguably among the most tuneful in thrash, really rendering the album an altogether less caustic affair than the average thrash album, but nonetheless keeping an uncompromising power and tumbling sound, over an engaging range of tempos. Having never listened to the whole album in a sitting before, I really didn't know what to expect next, each time a song ended, and I think there's something very enjoyable about it. While unified and solid sounding, the album seems to manage to encompass a really good range of tempos, styles and musical directions.

The melodic side of thrash metal is, I'd expect, somewhat less explored territory than the more extreme side. Anthrax, however, certainly explore that side; Where before I might have taken the album a little bit for granted, with this mindset, listening to the album becomes very interesting indeed, revealing it for the innovative, and actually quite unique thing which it is. Without losing sight of it's thrash identity, the album manages to have quite a traditional-metal, perhaps also punk-infused sound in places, which gives it a real flair and rock n' roll feel, at least, the kind of music in which people wear sunglasses indoors. It makes the album rather grand, big, and anthemic compared to the relatively small feel which a lot of thrash possesses. A band like Slayer are akin to a small, extremely angry rodent (that isn't to say they don't sound excellent, however.) Anthrax, on the other hand, in this album particularly, are more along the lines of a large, melodic whale. It's also something of a testament to how diverse thrash had become by the end of the eighties, which occurred to me when I thought of the hundreds of thrash albums which sound nothing like this, but are still connected.

You often get people who think that Anthrax' position in the big-four of thrash metal is rather precarious. If we Ignore the fact that it doesn't work like that, I still find myself disagreeing. With albums like this, the band have every right to be there, and if you ask many people, this isn't even their best one.