#195 A Forest of Stars - A Shadowplay for Yesterdays

A Forest of Stars are a band which I'd not listened to until I saw them opening for Wodensthrone a month or two ago. Never, since I started being able to go to gigs, have I seen a band which were so immediately vital to my continued musical happiness - I bought their latest album from a merchandise stand almost immediately. In this review, I'll attempt to shed light on why the band appealed to me so greatly. 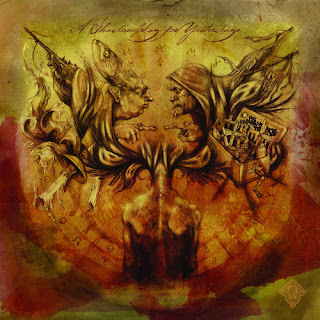 I'm going to be entirely honest and not downplay the fact that I think this album is one of the best ack-metal albums I've heard all year, and that the band are one of the finest I've discovered this year. Of course, a prerequisite for a well-written review, I'm told, is a level of justification to such proclamations. I wouldn't know, having never written such a thing. What the band deliver in this album isn't quite the same as the very long-winded material of the albums which came before it, but is, as a postcard-flyer I was offered at the gig described it, the band's most accessible so far. I'd understand if this send worry through the bodies of many a fan, but judging by the way this album sounds, it was a good move - I enjoy the previous albums, but this one is the most memorable and indeed catchy, in places, and indeed, perhaps even more unique, which is saying something about a band such as this. It's difficult to explain the band's sound to someone who hasn't heard them before, but one word is vital; eclectic. the sophisticated lyrics and distinct, refined vocals clearly take influence from the Victorian era, and the band's stage presence itself, if you get the chance to see them live, is certainly very distinguished. On top of the conventional black-metal core of musicians, the band is also bedecked with synth and a violinist, deepening the music's atmosphere and greatly adding to it's uniqueness, especially the latter, with fantastic, haunting violin melodies often being at the core of a song or section.

The number of influences which the band bring to the fore is an ongoing source of amazement to me, especially because more of them ooze from the albums sonic-woodwork. Folk, of course, but also a bouquet of other things, many of which I can't even name, all of which work together to make the album a psychedelic kaleidoscope, and, above that, an opus which is genuinely beautiful - the atmosphere, the stirring musical notes, everything seems to fit into place wonderfully, certainly one of those albums which feels like a bona-fide musical journey - definitely one to simply sit and listen to and absorb the infinitesimally huge number of dimensions that the album has. It's quite a struggle to think of any bands with much true simarity to it - sometimes I detect a hint of the progressive-black-metal style of Enslaved, and it's true that the band share something of a sound with other British black-metal outfits, such as Wodensthrone and Fen, but with anything I can think of, the band have more apart and less in common to, A testament to their uniqueness. As such, the album may be a little bizarre to the first-time listener, but works perfectly. Perhaps black-metal as a whole relates to A Forest of Stars in the same way that rock looks at bands like Jethro Tull.


Concluding this review was trickier than I thought it might be. Essentially, I've said everything which needs to be said. As far as I'm concerned, this is a fantastic album, and one which, while it's only been out for a few months, I've already listened to it many, many times. I thoroughly recommend it.

A real contender to be on the Heavy Metal Spotlight album of the year list. 9/10.