Depending on who you ask, the album previous to this - The Formation of Damnation, is either an excellent thrash album, or fairly unexciting. Personally, I'm quite a big fan of the album, and my interest was grabbed as soon as a follow-up was announced, and now, here it is. The question on everyone's mind, is, of course, is it any good? Once again, it depends on who you ask. I'll take the fact that you're reading this to be equivalent to asking me. Well, let me tell you. 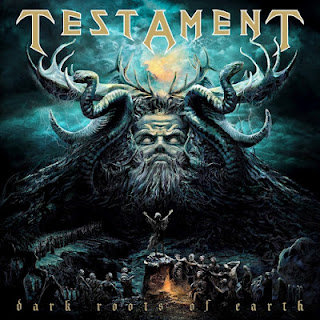 After listening a couple of times, it was certainly clear to me that the album has a strong character of it's own. It's not The Formation part-two, or indeed, part-two of any of the band's previous albums. It certainly sounds like Testament though, which is always a good sign, obvious as that observation might be. As one can expect from Testament, the album is filled with impressive leads, with the familiar clear, mournful tone, the trademark of Alex Skolnick. The album also delivers the band's energy, which only seems to grow with the years, with riffs full to the brim with energy whether they reach the blistering speed, or swaggering mid-tempo which dominates the album. Of course, Chuck Billy's trademark roar, which runs through the band's back-catalogue, an iron rod of consistency, is reassuringly present, in this album, sounding as good as they ever did, both at the ferocious end of the spectrum, and in more mellow sections, for instance in Man Kills Mankind, where the melodic and catchy vocal lines remind me of The Ritual, namely songs like Electric Crown. The album as a whole has a bit of an old-school Testament flavour, and I certainly get the occasional taste of earlier works like Practice What You Preach, more so than I got from The Formation, which was recognised as the band returning to their thrash roots. Dark Roots of Earth, perhaps appropriately, continues to work with these roots, perhaps even more so.

On the whole, the album seems to be a little more melodic than the previous one, which is also true of The Formation of Damnation. What this suggests to me is that the death-metal influence which was strongly present in the bands mid-era material is lessening somewhat. I'm not too worried by this, personally - I enjoy both the band's heavy and more melodic material, and this album certainly has enough heaviness to hit the right buttons. While, as is thrash's persuasion, the album for the most part consistently energetic and ass-kicking, as opposed to having a wide-open epic feel, there are certainly some atmospheric elements within the thrash, something which Testament really demolish the opposition at - their music has always had a strong atmosphere above and beyond "normal" for thrash, and this album is no exception, with songs like "Throne of Thorns" being deep, in addition to thrash-tastic. As with the previous couple of albums, the production is notably good, with crisp, but natural sounding, drums and guitar tone with a real feeling of substance. I really can't fault the production at all, and to be honest, I can't find much about the album which I can reasonably criticise - Initially, I though that the songs weren't going to be as memorable as those on The Formation, but as it turns out, I rapidly changed my mind on that.


I think, with time, and when, of course, this album settles into my head fully, it'll certainly be up there with some of my favourites by the band. I can already say, confidently, that as far as I'm concerned, this is most certainly a worthy follow-up to The Formation of Damnation.