There are plenty of ways to discover new bands, and one which everyone is probably familiar with is when bands which you've not heard before appear in the "recommended videos" section on Youtube. I'm one to go on the occasional spree of such discoveries, and, as I'm sure you have already guessed, heavy/doom metal outfit Wishdoom is one such band. I've always loved ancient-Greece, which, as one of bands primary lyrical theme, drew me in immediately. 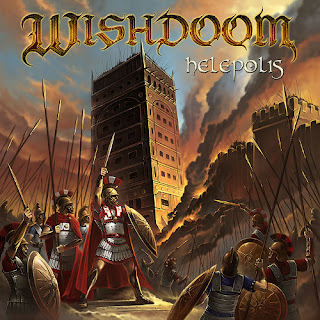 You've got to be a bit elastic with the term "doom" when referring to the style which Wishdoom play - while indeed, there are plenty of sections which are certainly slower than traditional metal, the band don't quite have the grumbling, geologically slow pace which many of their fellow doom bands do. The music has a very generous spoon-full of said traditional metal, much akin to, but even more so than, epic-doom bands like Solstice. At many points, especially in terms of the operatic, relatively high-pitch vocals, I can definitely detect a slight power-metal edge to the music, which invigorates the epic feel, but, despite my fears, manages not to make the music cheesy. In fact, the album manages to have quite an honest, organic feel, with nice solid guitars and no-nonsense, modestly produced drumming. The guitars, especially, manage to have plenty of melody, with lead-work laid thickly, but at no point lose-sight of the all-important riff, and Wishdoom certainly manage those - tasty, old-school chunks of chord-driven energy, which are rough, tough and memorable, but carry with them the essential beauty which epic-doom metal needs, which is further accentuated by the lead work, which also carries a pleasant realness to it. I find that often, too much lead work can make a band sound a little too over the top, but this band manage to get the balance about right.

The album also incorporates the occasional flavour of synth, which I though might spoil it, but, I'm happy to say, for me, atleast, didn't. Much like the other sources of atmosphere within the album, the band have used synth modestly, and most of all sensibly. The fact that it doesn't saturate every note of every song is a gift - making it all the more enjoyable, and indeed conducive to the atmosphere of the music, when it is used. The shortness of the songs (by doom-metal standards, anyway) is quite noticeable in places, and it's certain that none of the songs become tediously repetitive or long - on the other hand, the album doesn't have any definite "anthem" tracks. This is tolerable, considering that there doesn't seem to be any filler either, but I'd be hard pressed to pick a song which is the "leading" song on the album. Maybe, however, this is a good thing - and the album is certainly a very consistent, and smooth-flowing album. The energy which the album carries with it is also quite notable, with song like "Crystal World" really demonstrating the force which the band can bring to the fore - the energetic drumming, and mid-tempo intensity which the band unleash was definitely enough to get my head nodding while I sat typing.


I can safely say that this was a very enjoyable album to listen to - a great blend of epic and straight-forward heavy metal, and definitely a bastion for everything which is good about both. I was initially a little apprehensive, but Helepolis turned out to be a damn impressive album.I'm giving this a 8/10.