I don't really know where to begin when it comes to reviewing Devin Townsend's material. Other than knowing that Ziltoid the Omniscient is one of his albums, and the one I've heard the most bits of. Of course, I listened to the whole thing before I reviewed it, which is especially important considering that it's a concept album. A really fucking wierd, cult-classic concept album, in the vein of pulp comic-books of bygone days. 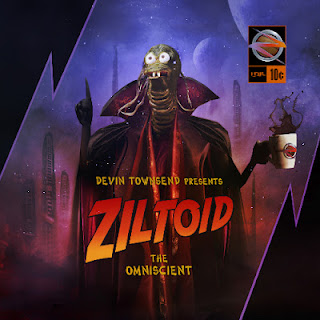 It's difficult to describe the sound which the album has; Sort of industrial, progressive, symphonic and electronic. Perhaps there's a hint of djent in there too, but obviously there isn't too much of it involved, because if there was a lot, I'd probably find the album incredibly tedious to listen to. I get the impression that the musical prodigy that is Devin Townsend approaches his albums with the creative ways of a child - not afraid to colour a tree in purple if there's no green, and not afraid to go outside the lines, and the Ziltoid album certainly seems to admirably showcase this somewhat; The album is somewhat manic, with a clashing blend of humour and an epic-feel which work together well at times, and at others, I sometimes feel get in the way of one another. Most of the songs make use of epic synth, which often really elevates the tone, creating a fairly vast soundscape with an airiness and scale which really harkens to ambient and electronic music, which is, perhaps, where the slightly cheesy feel which makes itself apparent from time to time comes from too. At the same time, the deliberately clichéd and tongue-in-cheek storyline keeps coming in and reminding me of it's existence, which makes it very hard to decide whether I want to listen to the album as an epic-piece, or as a humorous-piece, because I'm struggling to do both at once, simply because I feel very serious when listening to epic songs, and the epic songs herein are not too serious.

I certainly admire the album's catchiness and anthemic structure, and I'd certainly allow crisp-production fanboys to ejaculate unpersecuted all over the albums neat, not-a-hair-out-of-place production, if they put some newspaper down first. The fact is, I'm not a huge fan of overproduction, but I also believe that sometime it just works. This is one such album, and I'll concede that the smooth production is probably good for it. The programmed drums are, at times, exceptionally clicky, and it sounds like someone is playing with a flip-book in the corner, but even this isn't too much of a problem - it's what I expected to hear, and the albums sound is certainly unapologetically un-organic. It ties in well with the whole sci-fi thing which the album has, all things considered. One thing which is best addressed is the elephant in the room - the fact that the album is a concept album. It's quite an interesting tale - that of a tyrannical alien being and his search for "the perfect cup of coffee", and the in-your-face bizarreness of this normally wouldn't do anything for me, but, and this is a major but, the way it's done in the album does have something of a redeeming charm, and I definitely find myself enjoying it somewhat, albeit not as invested in the story as I could be.


I sound a little harsh in my review, perhaps excessively so, because when it comes down to it, I do enjoy the album, and it really does carry the banner of Devin Townsend's uniqueness as an artist quite well. While I can't claim to be a die-hard fan, like the chosen-ones, I certainly enjoy this album once in a while. One thing is certain - this album is exactly as Devin Townsend wanted it to be, and whatsmore, it's impressive.