"Dalla Nebbia", I believe, comes from the Italian for "By Fog". The two-member atmospheric black-metal project from the USA ardently, and rightly, claim to be "...a far-cry from the corpse paint and spiked gauntlets of the Scandinavian orthodoxy...". The band seem quite correct in this assertion, which makes for an interesting EP to listen to. 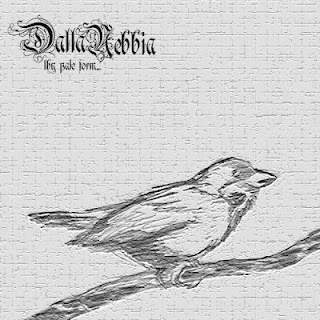 From looking at the cover art, to the first few seconds of music, it's almost immediately apparent that Dalla Nebbia's EP is going to be something a bit different, perhaps also, a bit unconventional. It is. Only three tracks, maybe, but three long tracks, which are filled to the brim with variety and generally forward-thinking musicianship. Much like the mist, the band have a wispy thin, ethereal atmosphere, very suiting of their name,  with a typically high pitch and floating, disembodied feel. The music occasionally does dip into a more rumbling and riff-driven path, for example in the final track "Shade of Memory", there occurs the occasional deeper, heavier guitar sound, interestingly utilised in a bouncy, but somehow still very black-metal sounding riff. It's fairly clear that this isn't, however, the mainstay of the band's sound - The EP is certainly a ride in a hot-air-balloon, and not a wild chase through the woods. The band blend many of the styles of atmosphere which black metal can have - being at times epic, psychedelic, upbeat and yet simultaneously mournful. It's interesting too, that the atmosphere definitely becomes more palpable and enjoyable with a couple of listens, and where before the lack of lower-end could be a little deterring, and make the music feel like it lacks substance, in the second listen, I began to get the feeling that the high-pitch is mostly just another facet of the atmosphere.

The well-deployed synth really compliments and uplifts the guitar parts, and there are some really great moments throughout the EP in which the two elements come together nigh-on-perfectly. There are some places too, in which it sounds a little bizarre - There's a short, prog-esque section of keyboard in "The Apex of Human Sorrow" which whizzed past my ears to the sound of my inner monologue going "hang on... what was that? It's quite a fun, out-of-the-blue little hook, and certainly made me pay even more attention to the music, in case such little devices were used again. It's certainly an aspect of the band which I enjoyed, that is, the sheer variety of influences within the music - more than I could name, and more than I know the names of. It really does a good job of keeping the EP exciting and engaging, and definitely gifts the band's sound with a level of uniqueness which adds to it.

I must say, this is an EP which really impressed me. More so than I was expecting to, and consequently, I have to say I recommend it to anyone who likes atmospheric black metal. There are some really tasty soundscapes in this EP, and it's a free download on Bandcamp, to boot.