It's taken me far, far too long to get around to listening to Fen, I can safely say that. Fen are an English band, and produce, like many of the bands which emerged at around the same time, a blend of atmospheric black-metal and post-rock. I still haven't quite grasped what post-rock is all about, but I'm definitely coming to believe that it tends to sound good in a black-metal context, and Fen has done nothing to dissuade me of this belief. 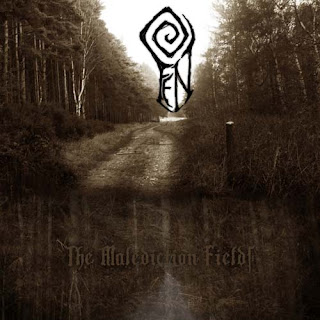 Pleasingly, Fen's sound is mined from the same seam of atmosphere as the bands which I know of in the style - Wodensthrone, Altar of Plagues, and the like. The album certainly sounds, perhaps not entirely, but close to, what I anticipated it to before listening; Long songs, with a sizeable amount of tasteful synth, and black-metal influences which leave the sound-scape vast, epic, but also caustic in many places. "Ancient Sorrow", the title of the band's EP, which precedes this album, is a phrase which really sums up the band's sound - Deep, timeless, and very cosmic in it's echoing, beautiful atmosphere. It is, in fact, a phrase I have loved for far longer than I was aware it was connected to Fen - It's my user-name on Metal Archives. The mournful, hazy clean-vocals which crop-up occasionally in the music, I didn't expect, but in retrospect, I should have; They fit the music perfectly, and really add some diversity to it, as does the bands penchant for using a wider-variety of instrument sounds than their peers, with piano, among other things, making the occasional appearance, effectively woven into the music. It's quite clear that Fen are quite an eclectic band in this sense, and aren't afraid to really let the post-rock and other non-metal influences they no-doubt hold take over, perhaps more so than many bands.

The highlight, and almost undoubtedly dominant feature of the band is, definitely, the atmosphere, both the syrupy, sepia-tinted slower sections, and the rush of elating energy which is delivered by the faster, heavier sections, not quite dark sounding, but not light sounding either, either way, music like this leaves me with my head nodding from side-to-side, and the feeling that I've experienced something greater, something transcendent. One of my favourite things about this style of black-metal is, indeed, the almost spiritual atmosphere, and the band handle it well, managing to blend mellow sections and the more energetic, but equally thoughtful black-metal sections. This is helped in no small part, I expect, by more-than-adequate musicianship and tastefully thorough production, which is, at the same time, left lovingly raw and natural feeling. The songs, and album as a whole, certainly run smoothly, indicative of what certainly sounds to me like good songwriting. The album itself firmly sounds like an album; complete, solid, and possessing an identity which is more than the sum of the songs on it. The Malediction Fields certainly does that - it's definitely an album which is worth listening to all the way through, as a single entity, too, perhaps consequently.


I feel a bit of a bastard for taking about two years to get around to listening to Fen, especially considering how much I've enjoyed listening to this album. The album is as much of an epic, atmospheric journey as any I've listened to in a long while, and I can safely say that it's been excellent.