Despite what the URL might suggest, this is NOT a review of Wheels of Steel. Oops.

Saxon are one of those bands I've known about for a long time, but never really listened to properly, let alone reviewed. Now is as good a time as any to do something about that. Knowing to start, however, with a band with such an enormous back-catalogue of albums can be a problem. As I usually avoid this problem by doing, I picked one of their classic albums at random; Denim and Leather. 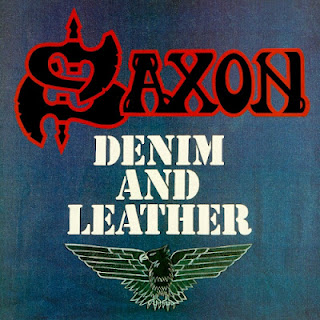 Both aesthetically and musically, I've often felt that Saxon are one of the bands who are most embedded in the rock n' roll world which the NWOBHM broke away from. From the denim and leather from which the album takes it's name, to the mellow, motorbike-cruising-down-the-highway style riffing which the band produce in this album, everything about it feels very catchy. Granted, in 1981, heavy-metal was, arguably, not quite as heavy as it would get in later years, but I'm certainly willing to postulate that both Judas Priest and especially Iron Maiden, two bands I constantly compare to Saxon, were already heavier, and further removed from traditional rock styles. I'm not, let's be clear on this, highlighting this in a negative light - It's not a bad thing, and it's certainly still an enjoyable album, with light, crispy sounding chord-based riffs, in the style of a much more engaging and variety laden AC/DC, and rolling, clear solos which have a real sense of beauty and soul in their smooth tones. I'd go as far as to say that the solos are one of the crowning features of the Denim and Leather album. The riffs are pretty high on the league-tables for "best aspects of the record" too. The cover art, however, didn't even turn up. It may be iconic to some, but I can't help but feel that Saxon's cover art in the early days was just a bit lazy.

The vocals, too, are really pleasant on this record. Melodic, more-so than some, but with a calm mid-range instead of the intense falsettos which were abound. This too, seems to hearken quite noticeably to rock n' roll, and many of the choruses have a really anthemic feel through the heavy use of backing vocals, especially in the title-track, which is really worthy of singing along to. Inclusive of all of the musical aspects, in fact, the album really is one of the most catchy NWOBHM albums I've listened to, certainly exceeding my expectations. Looking at the band's discography, I misinterpreted the bands huge output as being perhaps rushed, mass-produced, as it were, but I can see that this isn't the case - The band just had a hell-of-a work-ethic, like Motörhead. The album seems well-put together, and the song-writing can't be faulted - perhaps not as "progressive" towards building the NWOBHM into something distinct, as some bands, but certainly rock n' roll, on the heavy side, done well. Some of the riffs, such as those in "Princess of the Night" certainly have a sound which is strongly associated with traditional-metal.


I'm glad I decided to have a look at Saxon, undoubtedly a band who deserve their share of praise, and I'd certainly advise anyone who doesn't listen to them to do so. They may be among the underdogs of the metal-scene, but the fact that they've been making albums since 1979, and aren't stopping, really is a testament to their dedication.