When a death-metal band hails from The Netherlands, it's usually a fairly consistent assurance that they'll be pretty damn good at what they do. As such, it came to me as no surprise that Sinister have many albums which are regarded as firm classics. Having not listened to the band much before, I decided it'd be good for my musical health to listen to a few albums, starting, arbitrarily, with "Diabolical Summoning", which I shall also review. 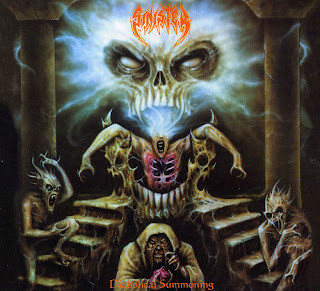 The Diabolical Summoning album was released in the golden-age of death-metal, and the production is certainly a near-perfect hallmark of this, giving the album a very quintessential sound, albeit an improvement on that which many bands had at the time. In this album, the bass is prominent, the drums are profound but not clicky, and the guitars have that really enjoyable heavy-tone, with an almost occult murkiness very fitting of the albums themes. Of course, production pales in significance to the music to which it has been applied, and from the first track of the album, I was confident that I'd gotten a hold of some death-metal which doesn't disappoint. Fiercely energetic, with thunderous percussion, occasional blast-beats, and an all round sense of musical prowess, the album really is an intense affair. The vocals, too, are guttural at just about the right level for my enjoyment - not too crazed, but certainly not weak, either. The aspect which caught my attention the most, however, is the fact that this album is an absolute monster in the riff department, with meaty, memorable chunks of guitar-work sounding like the roar of infernal engines - Just the right degree of thrash, a slightly groovy feel at times, and ultimately, a guitar tone which really helps the riffs hit home.

I've heard a saying that a death-metal album is only "supposed" to last for about thirty-minutes. If this is true, this album certainly conforms to the standard - but it doesn't rush past all to quickly - it's definitely an album with enough going on within it musically to feel longer than it's literal length, which I think says something for it's quality - It's an album on which almost every song is solid-as-a-rock, which certainly adds to it - the artwork, completeness, everything, really work to make the album very close to the archetypal form of "album". Certainly, with a couple more listens, I could see an album like this becoming one of my favorite death-metal albums. Perhaps it doesn't have a strongly distinct style in-and-of itself, away from the death-metal norm of the time, but I'll certainly herald the album as an extremely well-written traditional death-metal piece - which is definitely what counts. In all honesty, I've not listened to many death-metal albums which felt quite so complete. I've not listened to a huge amount of death-metal at all, in fact, but even a newcomer to the genre like myself can see the promise of this record.


I think I really picked the right album to first discover Sinister with, on this one, and while I discover many, many bands simply by reviewing them, I get the feeling that I actually will continue listening to them on a committed level afterwards. I'm thoroughly impressed.