We're bastards. For almost as long as we've been around, Mankind has been prone to killing one another, and having a fairly catastrophic disregard for our environment and the lives of the creatures which we share it with. Along came deathgrind outfit Cattle Decapitation to tell us all about it. Lyrically, a band extremely strongly opposed to the human race, their latest, widely acclaimed album, Monolith of Inhumanity sticks to this theme, with lyrics ranging from horrible things happening to humans to the horrible things humans do. 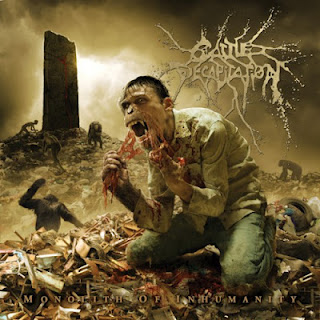 The first word which came to mind when I listened to the album was "modern". This isn't a bad thing, of course, but there isn't a single thing about this album which is "old-school", at least, that I can hear. This is the first Cattle Decapitation album I've listened to, so I can't justly compare it to their past efforts, but it's certainly a solid album in it's own right: Furiously energetic, manic and dark, while at the same time typically quite memorable, helped along by the diverse vocals, which really instil a lot of character, and set the songs, and sections within songs, apart from one another effectively, and certainly draw the listener in - this worked for me, and I spent the whole hoping that the next song would have some of that awesome mid-range shriek vocal, which, frankly, I found to be a little bit under-used throughout the whole thing, although that probably serves to make it all the more precious when it does come up. In terms of the other aspects of the bands sound, the album is unrelenting, with terrifyingly rabid and speedy blast-beats and a generally incredible energy level in the drumming department, and an all-round technical proficiency, both with the drums, and everything else. As I said, all of this sounds rather modern, both in terms of tone and indeed the jumpy and tech-death influenced songwriting.

The production is modern too, the album initially sounding quite standard-issue in this respect, with the tone and clean, crisp production which I'd expect from something like this - The drums especially, have a real sharpness, and while unobtrusive, do have a little bit of a plastic feel to the point that I felt I'd better check if they were programmed. It's probably for the best though - the sheer speed and thickness of the drumming probably demands it to preserve it from dissolving into a rumble. It's certainly forgiveable, and all in all, I'm not actually that bothered about clicky drums in a context like this, where they work quite well. In addition, while the production may be modern and digital, it would be wrong to say that it detracts too much from the album - the music certainly retains it's atmosphere, which ranges from dark and smothering to sections which have an almost epic feel, albeit still one which is lashed to the themes of the album. All in all, the atmosphere really works well with the albums themes and lyrics, most of which are visceral and gory, but manage at the same time to be thoughtful and original, which helps separate the band out from the crowd of similar artists. What the band create is a bleak, agonised slaughter of human flesh, and it's a damn impressive album to listen to.


I felt, due to the sizeable positive response that the album was getting, I simply had to check it out. It was definitely worth it, and the album is certainly a solid, well-written opus. If you like music with heaviness and an intensity like a sonic-strobe light, this album is definitely for you.