Ketzer are a promising German black-thrash band which I've been following for quite a while. When I heard that they were doing a new album, really got my attention. I told myself that I'd not review the album until I'd bought a copy. I've not been able to do so yet, so I've decided to just review the album anyway - about six months after it's release. Better late than never, perhaps. 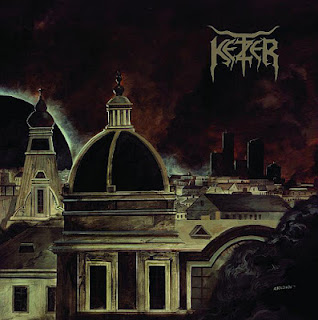 I was very impressed when I first listened to "Satan's Boundaries Unchained", the band's first album. I'm pleased, to say the least, that this album seems to be equally inspired and well-made. The raw aggression of the first album, which was one of it's most prominent features, is definitely still present, but is refined - more grandiose and more ambitions - The first album is composed mainly of take-no-prisoners black-thrash belters, and while this album has many too, it's also got a touch more scale. It seems that now, the band aren't afraid to stand back from the neck-breaking tempo occasionally and embellish their music with atmosphere, which, personally, I think works really well, giving the sophomore album a sense of identity and development - You also really get the feeling from the tracks that the band have really found their sound on this album - it sounds in a way more confident for lack of a better word. It's often said that a band's second album can often be a problem-child, but the path which Ketzer have taken on Endzeit Metropolis has gone a long way to ensuring that it has as much identity and strength oozing from it as their first.

Endzeit Metropolis seems to be a darker record than the previous one, and at the very least an equally angry one, too; More enveloping, evil and in many places brooding - Songs like "The Fever's Tide" really harness the black-metal influence to great effect. I've always enjoyed tremolos, and Ketzer use them excellently, with evil, often innovative sounds conjured by their usage. I get the impression that the band have developed and improved on a technical level since their last album too, and while Satan's Boundaries was fast, and already impressively technical, this album is even more so. The production works well too - The drums sound like they have real substance, and on top of the drummers enjoyable style, the thickness of their sound really drives the music along nicely, and the strength of the percussion renders the album even more energetic sounding than it is in it's own right. The production overall is a little more polished than Satan's Boundaries, but in a good way - the edges are still rough, as they should be, but on the whole, the album sounds very coherent - well produced, well-written, and razor-sharp, the way black-thrash was meant to be.


Anyone who enjoys black-thrash will enjoy Ketzer's material - I can promise that. The band are hugely underrated, and on the strength of a release like this, their name should be on everyone's lips. I hope this review can count as me doing my part to make it so.