Perhaps among the unsung heroes of the thrash-revival movement, Vindicator have been making albums at quite a stalwart pace since their début, and United We Fall, the bands third album, is fresh off the press, on a new label, Slaney records. Apparently someone went back in time and killed Heavy Artillery Records' grandparents, because all trace of their previous label is gone. 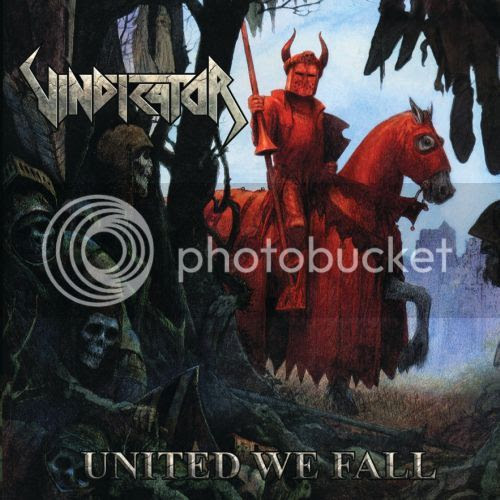 In addition to having a fairly epic name, the bands much is an enjoyable listen too - For the most part thrash metal of a particularly intense style; uncompromisingly angry and traditional, with a notable amount of open-string work, even for thrash - much like the band's peers Evile. In terms of influences, I can hear a lot going on in the music - bits of Megadeth, Testament, and most of the "greats" of eighties-thrash. Vindicator manage, mostly, to avoid being simply re-hashed retro thrash however, and they certainly have some twists and turns of their own to boast, and the band have an atmosphere and tone which certainly distinguishes them from others. The machine-gun, heavily rhyming vocals give the music a real driving force, extremely manic feel, especially in the faster sections, and a catchy edge. The album was certainly beginning to settle into memory after just one listen. The vocals are enjoyably traditional too, quintessential thrash vocals, for the most part neither quite sung nor growled, but at the same time encapsulating the explosive energy the band seems to have. I've listened to many of the newer thrash bands, and upon listening to Vindicator, I could really feel the energy, which many of the bands, while equal in tempo and sometimes ferocity, didn't have.

The album as a whole has some really tasty riffs interspersed through it. Some of them, you have to look for a bit, or only become apparent with familiarity, but a lot of them are unapologetically obvious, and really enjoyable - the album manages to let you hear what's going on in it reasonably well, despite being a whirlwind of speed. You can tell that Vindicator are a band who really care about solos too - The ones in the album, often very competent and notable, feel like a lot of consideration has gone into crafting them - they're not just thrown into the songs, but they really work, and listening to them really takes me back to the days when solos were my favourite thing in music. The albums overall production is interesting - it's odd in a way I can't quite pinpoint, but not badly so - the guitars sound very metallic, to the point that I can almost taste iron upon listening. This isn't an unpleasant tone, especially after a couple of listens. In fact, it's a nice change from the default modern production, albeit not so terribly removed from it - especially the drums, which are certainly well polished, but not so much as to be plastic. All in all, the production is nicely all rounded, and really capture the ferocity with which the album utterly flies along.