Folk metal and power-metal are two genres I'm prone to neglecting a bit, and indeed, perhaps I don't work hard enough to remedy this problem. I'm consciously going to make a bit more effort to diversify, if I can, starting with this album; Spellblast's "Horns of Silence", a début by the Italian folk/power outfit, which, conveniently covers both of the genres I need to listen to more of. What's more, I've been meaning to review it for ages. 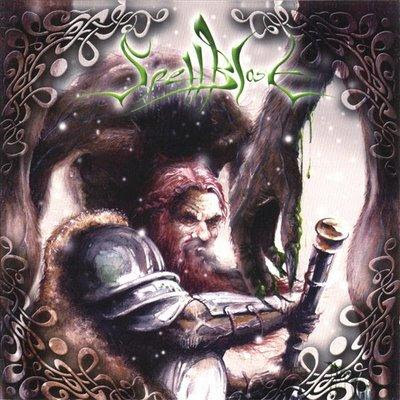 Sonically, the band seem to combine the epic, often slightly over-the-top feel of power-metal with folk melodies and a very strong and noticeable mediaeval/fantasy sound, which is purveyed by the melodies and synth work which is actually, for the most part, very tastefully done. A lot of power metal feels very smothering to me because the synth and general cheesiness is layered far too thickly, but Spellblast have a synth-sound which is crisp, clear and much more enjoyable than I expected. All in all, I must observe that the band is much less cheesy than what I expected, especially considering that they have a song called "Sign of the Unicorn" (which turns out to be a solid tune). It has plenty of energy and heaviness, and also a lot of emotion and beauty, often sincere and deep, as opposed to superficial. The album swings pleasingly between these aforementioned moments of atmosphere, and sections which are catchy and extremely fun to listnen to - The faster sections, and indeed the superb chorus of "Glory to the Gem" are exactly the way power-metal should be, while the more folk-influenced songs, such as "Goblin Song" have a feel of real uniqueness, whilst still oozing with extremely catchy sections and hooks.

The album has good musicianship and production, too - the riffs are tight, with a very pleasing, deep guitar tone, and the lead guitar is quite clean, clear and simmers in the solos and lead sections. The synth has a nice, modest feel to it, as I already mentioned, and the vocals are varied throughout the album, whilst managing at all points to be highly competent; strong, powerful and with a reasonable range. Certainly, the overall vocal quality is slightly above, or at least matching, the level of the average European power-metal band. The variety in the bands style is certainly an enjoyable feature, and the injection of folk which the power-metal receives certainly makes for an album which is not only interesting but is also very memorable and stands-out from the crowd. And with a crowd as big as that of European power-metal, that's a noteworthy feat. The albums gliding, wide open, and epic soundscapes feel really nicely-done, and while I don't know much about power metal, compared to the sub-genres I usually haunt. While the music may be a little over-the-top, in the way power metal so specialises in being, the music manages to sound honest and pure.


All in all, I'm pleasantly surprised by what Spellblast sounded like - To be quite honest, I was expecting something a little challenging to listen to, but it turned out to be quite an enjoyable album - certainly one which I feel good for having listened to.