United States power metal, or USPM, is a niche within power-metal as a whole, and is stylistically different from it's European-born counterpart; Often less flowery, less synth-focused and with a tendency to considered closer to no-nonsense, balls-to-the-wall metal. The closing phrase of that sentence describes Jag Panzer's début, "Ample Destruction" nicely. 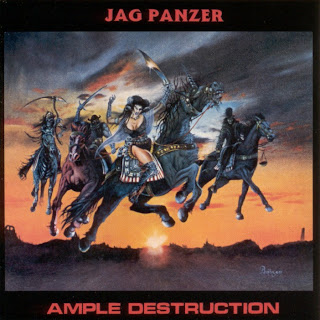 From what I know about USPM, which, like everything, is probably less than I should, Jag Panzer are a prime example - A little heavier than the heavy-metal which preceded it, but not too far removed from it. Ample Destruction, an undisputed, highly revered classic of the genre, seems to typify it quite well, even in a time before power-metal had a definite identity. Manly riffing, and a buzzing, slicing and utterly metal tone to it - the album is practically made of denim and leather, without being in the slightest bit over-the-top. The vocals range, but typically inhabit the mid-to-high range, much akin to the established, and indeed still flourishing NWOBHM. The vocals demonstrate plenty of vocal talent - powerful, honest sounding, and dominating the album's sound in many places, soaring above the other elements in the mix very prominently, often not seeming to fall victim to the somewhat rough production which flavours the rest of the album; perhaps, I feel, a little rougher than would have been best, but nonetheless fitting, both of the albums character, and of the character of USPM at the time - emphasising the rough-cut nature of the music, in comparison with the tidy, shiny European brand of the style, which was already starting to be assembled out of fairy-dust and dragon pubes across the Atlantic.

The album is one which takes a bit of listening to enjoy fully the elements hiding below the surface. On the second listen, I found myself finding extremely enjoyable and catchy hooks, sections, riffs, and a whole cohesiveness to the whole album; it seemed a little shaky on the first listen, but on the second if seemed to have foundations of iron. This left wondering how on earth I'd missed these things the first time around. It's just one of those albums. I wouldn't quite call it a "grower" but it definitely can't be taken-in in a single run-through. I always have a pleasant experience to listen to an album with real solidity to it, and I can certainly sense that in this one. Maybe not quite what the frequent hundered-percent ratings lead me to expect, but damn near; a nice-tasting piece of work. Certainly good enough to forgive the band taking ten-years to produce a second album, which apparently nobody liked, when the début's quality is coupled with the fact that, until they split-up in 2011, many of their albums were of a similarly high calibre to the début. All in all, to overuse that phrase to death, the album certainly warrants it's classic status.


If you could distil an album and put it in a bottle, Ample Destruction would be the antidote to plastic, over-produced modern metal; I often say it, but with this album especially, this is what metal is all about!