Baroness are one of the better known bands of Savannah, Georgia's sludge-metal scene, along with peers such as Black Tusk and Kylesa. Yellow and Green is the band's third album, and a double album at that. Before listening to the stream, I'd heard very mixed reviews, and opinions were certainly split. For a while, I wasn't sure what to think myself, either. It was certain, however, that this album was going to be different. 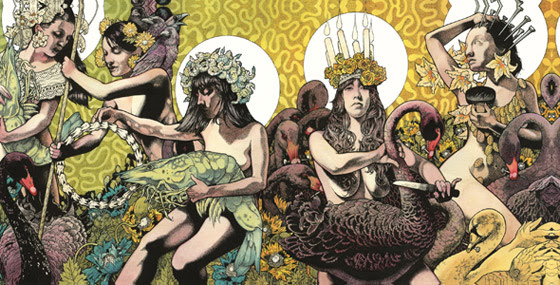 Yellow and Green shows us, from the onset, a smoother and more rock orientated version of the band. While the signature psychedelia and outright bizarre style of Baroness is still utterly noticeable, and welcome, the band is certainly more melodic, especially vocally, where there is a ten-fold increase in vocal harmonies and cleaner-style vocals, with many of the songs taking on an almost pop-music feel. "Little Things" for instance has a rhythm which wouldn't be out of place in eighties new-wave, and all round, the double-album has quite a commercial edge, which isn't quite disguised behind the albums quirkiness. This theme is also prevalent in the band's overtly catchy choruses and riffs, especially on songs like "Take My Bones Away". It does seem that the band have definitely made themselves more accessible, perhaps naturally, perhaps deliberately. It feels like something has been lost, especially in terms of heaviness; The bellowing vocals which got me into the band on Red Album aren't used much, only on a few songs, and frankly, I miss them. The riffs aren't anything like as heavy either - all in all, the guitars are quite subdued, certainly providing a twisted atmosphere which the band always had, and are still doing so (the albums atmosphere, I will not dispute, is excellent) but there are few of the bone-crunching and roaring riffs which the band used to do. The "Green" part of the double-album, while more heavy and guitar driven, still isn't quite the same.

This brings me onto another thing; The two albums don't feel massively distinct from one another. I don't know if they're meant to, quite frankly. Despite being quite light, airy and soft, I'm certainly not writing-off the album - in all honesty, I quite enjoyed it, but it's certainly a different kettle-of-fish to it's predecessors. The change isn't mind-numbingly distinct - The album isn't a huge diversion, and it much less of a change of direction than I was lead to believe, in fact, it feels quite a successful evolution, and the album does feel like it's part of the Baroness "family" but it's certainly a notable step, and almost certainly a sign of change to come. In my experience, the surest way to tell that a band has reached a stage of borderline-mainstream success is when Metal Hammer magazine begin to take an overt interest. They have. The album simply isn't as crazy, and while undeniably still quite nuts, it seems a little more grounded in reality than it's predecessors, and isn't quite as progressive - a greater proportion of the songs sound "conventional", you might say. The album is, nonetheless an enjoyable use for 75 minutes.


I think, all things considered, that in excess of my expectations, or at least, what I'd been told, I'd consider this album to be successful - It's got plenty of experimentation, and there's no denying that it still feels like Baroness. It's not really sludge metal any more. Perhaps not even quite metal at all. It's still not bad though, and I for one will make a note of informing people that it's "decent".