I've seen this album in shops, and online, for a while now, but on the other hand, I've not heard much about it from anyone; in fact, it seems to have been a little bit overlooked - To that end, I had a listen to it, to see if there was a reason for this. The cover gave little indication as to what style the band would be, although something suggested to me it might be black-metal. Probably the inverted cross in the band-logo. It turned out, however, to be a dark, uncompromising speed-metal album, and a good one at that. 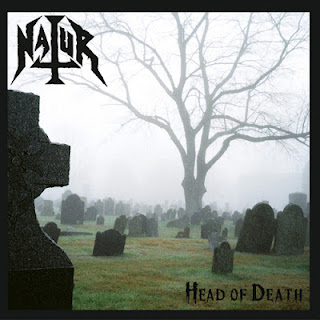 While speed metal they may be, Natur seem to be dark and sinister enough in the sounds they create to certaily warrant the inverted cross and morbid imagery on this album's artwork - Most of the music in the album is touched by darkness, either in the way they sound, or what the lyrics are about. That isn't to say the music is too overtly removed from energetic, rocking genre which they fit into. Tough, ballsy guitar work and melodic but attitude laden vocals are the hallmarks of the album, and really pitch an old-school vibe through the speakers. The addictive rhythm-guitar tone is low, crunchy and really gives the album a thick sense of heaviness and energy, and the impressively catchy lead-work which overlays it really caries a soaring feel, with a deep, almost overtly beautiful tone, and a very honest, down to earth style, which I admire - the lead guitar is being used to create great melodies, and not messing around trying to be technical. The latter phrase, in fact, is probably a fairly good general statement about the band's style as a whole - no-nonsense, honest, and in your face heavy metal, the way they made it in the good old days. Not quite bare-bones, perhaps, but very true to a live sound, and incredibly organic - You really get the feel of a band who work in the way bands are supposed to.

The vocals are enjoyable too - catchy, with some great vocal-hooks, but not over-the-top at any point - quintessentially speed-metal, with little of the pomposity and operatic stylings which work well in power metal, but frankly, need to be had a break from once in a while. Natur provide said break very nicely, with very competent, but pleasingly rugged vocals being delivered throughout the album. The production is something I almost always mention in every review, probably much to the boredom of anyone who actually reads them, but I find the production of this album particularly enjoyable - There clearly hasn't been any excessive post-production fiddling - instead everything sounds very true to the way it would sound coming out of the amps, or the drum-kit, or the vocalist. The drum sound, especially, sounds very notably "correct", which is always enjoyable, in a world of drums which are so produced they may as well be sequenced. The album as a whole really doesn't prescribe to any idea of "modernness", but at the same time, it doesn't feel re-hashed, or derivative of older bands - Certainly, they've influenced it, but Natur, to me at least, really stands out on it's own. Retro? perhaps a little, but certainly rejuvenated, and not a pale imitation of anything.


It does seem that this band is a little underrated, and I'll certainly be doing my bit to mention them when appropriate. I'm very impressed by the album myself, and will certainly be listening to it in future some more. A promising debut full-length, if ever I saw one.