#207 Winterfylleth - The Threnody of Triumph

Winterfylleth are regarded by many as one of the bands that rejuvenated the British black-metal scene, or, at least, as one of the founding members of the loosely defined "English Heritage" black-metal movement. Whatever you think of them, I'm sure it's not just me who has been waiting with a sense of interest to see what form their third studio album, "The Threnody of Triumph" would take. 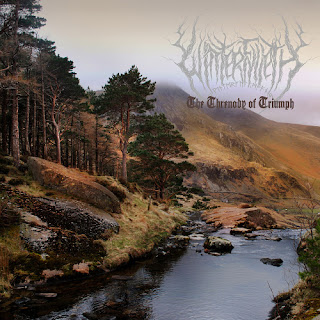 Album number-three, I find, is always an interesting place for a band to be; and, indeed, probably an equally interesting place for the fans and onlookers upon the band's chosen path. By album three, changes in the bands direction, especially gradual ones, start to become apparent in earnest. When it comes to evolution of sound, like the moss over the cracked gray stones of a ruined fort, Winterfylleth are in no hurry. That's not to say that the band aren't evolving, simply that they're taking a relaxed, ponderous approach to it; The album doesn't sound overtly, massively, different to it's predecessor, and only a slight magnitude different from the debut. The Threnody is, more so than an evolution, a refinement on the existing Winterfylleth recipe, with the songs more carefully written and well thought through; The increased beauty, atmosphere and identity which is resultant is quite noticeable, and suggests to me that while it's not too far removed from the previous albums, the band really managed to hit the nail on the head this time - I'd perhaps even venture to suggest, without meaning to belittle their previous efforts, that this is what the band have been aiming at all this time. The smooth flow and enjoyable songs are certainly a change from the unsure, diffused identity of Ghost of Heritage, or the unaccessible feel of The Mercian Sphere.

There are a few indications of the subtle changes of the band's sound - and probably a few which I've missed, at that. The atmosphere seems thicker and more absorbing. While the band have always played a similar style to Wodensthrone (or the other way round), My first observation upon listening, literally before all others, was that this album sounds particularly akin to that peer, although, I must add, I don't consider this a bad thing, especially considering the implications to the music; Compared to the previous works of Winterfylleth, the whole album seems more reverb-laden, tremolo-heavy and atmospheric, ascending in beauty, whilst fortunately losing the obtrusive chunkiness which was particularly apparent on The Mercian Sphere, which rendered the whole album a little bit tricky. It's also good to see the band departing perhaps a little further from the conventions of standard black-metal, which, of all of the bands who are associated with the "English heritage" style, Winterfylleth seemed initially to be sticking to most. As an album, this one seems to really captures, and does justice to, the things which the band set out to do; the atmosphere, feel and folk-laced embellishments of the music is really exemplified well, in an album which, to my ears, is very probably the best they've conjured yet.


It's always nice to hear a band who are good at what they do, but even better to hear a band who are continuing to improve upon it; becoming better at what they do. I thing this may well be the case with Winterfylleth; While the first two albums caught my attention, and I enjoyed them, I think The Threnody of Triumph has won me over as a genuine fan.