I needed to do something a bit special for the 200th review on this blog, and for a while, I wasn't sure. my 100th review was of Bathory's Nordland album, one of my all time favourites - but this time I decided I should look at the bigger picture - what could I review to mark the 200th review? One band which I had neglected until now seemed glaringly obvious; The founding fathers of heavy-metal themselves, Black Sabbath. 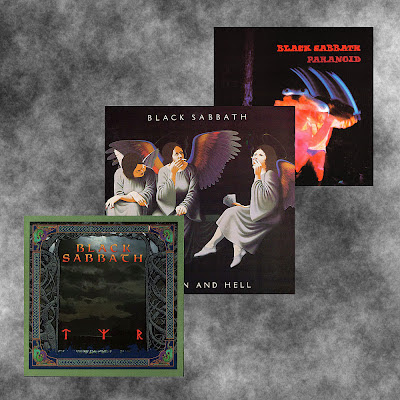 With a band who have, many a time, formed such a monolith of musical might, it's often difficult to pick an album which really feels the most worthy as a classic. To this end, I've decided, for the first time on Heavy Metal Spotlight, to review three albums in one. Paranoid is probably the band's most widely known single, and perhaps by proxy, their most well known album, and as such, it was a must; in fact, it was almost the album which I chose to review alone. But Black Sabbath are far more than a one trick pony, and other albums must be considered. Heaven and Hell is hailed by many as the bands rejuvenation. A third album, I felt should also be included in the mix - the less known Tyr, with vocalist Tony Martin at the helm. While the band have had more than three vocalists, reviewing an album with Ozzy, Dio and Tony Martin felt very appropriate. The release dates also bore a pattern; 1970, 1980, and 1990, respectively. Without further ado, let's begin. I think I'll do this in chronological order, starting with 1970's Paranoid. 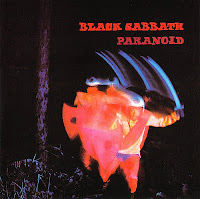 Like the band's debut, the opening track greets the listener with a sustain-filled barrage, this time in the form of War Pigs, still heavy today, let alone over forty years ago. It's no surprise, upon listening to the record, that people consider Iommi to be the master of riffs, with master-crafted, memorable, and at the time, truly astonishingly unique, guitar work, from the dark, intoxicating work on songs like the opening track, which make the band's blues-rock heritage very apparent, to the rough, fast-paced work on songs like Paranoid, a forefather to many a metal song after it. It's without a doubt that this band, and especially this album, is a vital puzzle-piece in metal's musical heritage.

The uniqueness of the Paranoid album certainly reserves it a special, revered place in music - It's worth pondering that, at one time, this was the heaviest album in the world - many, you will find, still think so. Paranoid is, without a doubt, early metal at it's best, but that isn't to say that the album is without surprises - the mellow, psychedelic jam-like track "Planet Caravan", complete with hand drums, really shows that the band have never been constrained to one dimension. The album's influence is immense, or course; it's easy to see why doom metal especially, can track it's roots back to albums like this, with the slower, heavier songs on the record wearing a truly apocalyptic mantle, with the haunted wail of Ozzy perhaps not matching the outright talent of Dio, but fitting the music in his own way, and certainly laying down what, to nine-out-of-ten people, is the only era of Black Sabbath they are likely to hear. Paranoid is certainly one hell of a solid album, to the point that even the filler, the title-track, written over the course of only a couple of hours, went down as an iconic song, and without a doubt, is still the Black Sabbath song you're most likely to encounter anywhere. One might think that as such, this album would be thee album to review, but no; monumental as it may be, there's more to the story; a chapter called Heaven and Hell. 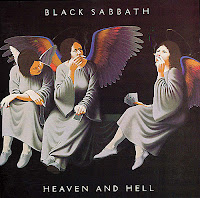 Ten years on, and with Ronnie James Dio having recently taken up vocal duties, Black Sabbath was quite a different band. This album doesn't start out with a cacophonous single chord, but instead explodes in a comparatively high-tempo riff, that of "Neon Knights". The concentrated rage and passion of Dio's voice granted the band a definite rejuvenation in the vocal department, and allowed them to explore it more intricately, with songs like "Children of the Sea" probably not having been possible in the same way with Ozzy. All in all, in fact, the Sabbath of 1980 was a much more grandiose, and a bit less blues-influenced creature than it was a decade earlier.

It's easy to assume that the changing climate in metal, which had, by this point, become a thing, was responsible for this, but it's worth knowing that even in 1980, Sabbath were quite close to the head of the charge - Heaven and Hell was certainly released before many of the "essential" albums of the early eighties - a fortnight before Iron Maiden's self titled debut, for instance. It's not to say that these bands didn't influence one another, but Black Sabbath have, in my view, been quite self contained. The anthemic, virtuosic, and even keyboard-including turn which Heaven and Hell took the band in certainly seems to fit well with what the NWOBHM was just starting to do, and it's a safe bet to say that this album fits in better with traditional metal than that band's back-catalogue up to that point, leaving the earthy sound for the most part behind, and ascending somewhat, with more focus on overt atmosphere and lead-guitar, with Iommi dwelling less in the monstrous riffs of the past, and more in lead work and an more technical sound. Personally, I find Heaven and Hell not only to be one of Sabbath's best formed albums, but also a real showcase of Dio's vocal talent - perhaps even the apex of his abilities. 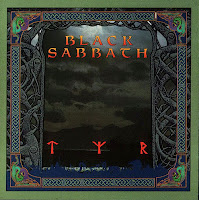 The casual black-sabbath listener, not particularly invested in the band, is probably making a mistake to ignore the Dio years. It's probably more forgivable if they haven't listened to much of the Tony Martin material, although it's certainly a shame for anyone who enjoys the music to miss out on it. Tyr is one such album, and was released a further ten years after Heaven and Hell. Changing the trend once again, by starting gracefully with clean guitar, then crescendos into a synth-heavy epic track, it's clear from the onset that once again a different entity entirely. My knowledge of Black Sabbath's less known material isn't quite what I'd like it to be, and Tyr was certainly an album which took me by surprise.

In a way, Tyr is even more rooted in traditional-metal than Heaven and Hell, with even more prominent synth in places, especially tracks like Anno Mundi, and a tempo which at times renders it positively speedy. In this album, Tony Martin's vocals are, in my opinion, easily as good as Dio's were, albeit very similar. Of the three albums I'm looking at today, Tyr is probably the most epic, with a sound which combines a lot of synth with a traditional metal feel, perhaps with a hint of what might be considered epic-doom in the slower material. This album, of the three, also sounds most removed from the "Quintessential" Black-sabbath sound - the guitars are less gloomy, lighter, and once again, atmosphere is emphasized over the humble riff; Powerful solos, modern production, and very mythical themes really make the album sound like a completely different band to the Sabbath who released tracks like Electric Funeral. The vast, fantastical soundscapes are vastly removed from the bands traditional murk, but are refreshing, as opposed to hugely uncharacteristic. A surprise to the casual listener, like myself, but at the same time a fascinating development,managing to be very epic sounding without being too cheesy. It lacks grit, perhaps, but it makes up for it in rousing fist-pumping glory. The fact that this was released in 1990, when a lot of the interest in traditional heavy-metal was dissolving away is impressive, and indicative of an incarnation of the band which was content to do it's own thing - something which can't happen if any of the Osbournes are allowed anywhere near it.


Ultimately, Black Sabbath are a band of many dimensions, and many incarnations, with a back catalogue richer than almost any other band of the genre. It's only fitting that review #200 is about them, and only fitting that it is of such length. I wouldn't deify the band - hell, they've made some real fuck-ups in their time, and have been screwed over, and screwed each other, plenty of times, but at the end of the day, I have a great respect for them, and a great love of their music.

A swift recovery to Tony Iommi, and hopefully a reunion not fraught with too many more cock-ups.

I will refrain from actually giving any of these albums a rating.