I sometimes wish I'd had the foresight to make some kind of "Iconic thrash-bands I've neglected to review before" strand, but as it is, it'll have to simply be a loose theme. If you're a regular reader, you may know of my propensity to inadvertently neglect albums by very well-renowned thrash acts of the eighties. So anyway, Sodom! 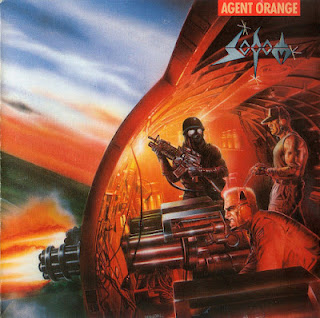 Sodom are a particularly spiky and ferocious thrash brand, certainly much more so than the minimum standards imposed by the spontaneously imagined grand council of thrash-metal. Indeed, the band are also about as close to empirical evidence as one can get that Teutonic thrash typically has a bit of an edge over it's American counterpart. Many consider the band's earliest material to have something of a black-metal feel to it, and while the band were, by the time Agent Orange was released, a thrash band through and through, the band's sound does leave me wondering if the acrid, caustic black-metal traces ever actually left. While the band pack as many meaty riffs into the album as any good thrash band, they also excel at the faster, more chaotic riffs, maniacal, with an almost percussive nature, and a bitter, burning and ravaging feel, much like the chemical of the album's title. This album, especially, seems to get the balance between swaggering, hard-as-nails chord based riffs and faster, wilder guitar work about right, with enjoyable hooks, but also sections which are armed with enough tempo, energy and white-knuckle madness to blow your boots off.

The atmosphere which thrash-metal creates is very suited to the themes of war most of the time, but it's safe to say that Sodom are a band who do it particularly well; While not all of their songs relate to the theme, it's certainly a thematic place which their music suits dwelling in, with the chaos, attitude, and indeed the aesthetic of the albums artwork really nails the theme excellently, but with a hefty spoonful of thrash-metal's own over-the-top flavor. I'll go as far as to propose that the album quite effectively captures the spirit of thrash itself, with a level of energy which really makes you want to whirl your head around, and riffs which are sufficiently hooky and memorable to demand the listeners full attention. Another of the things which really appealed to me about the album was the sheer variety which it held; there are songs which are attitude filled, almost punk-influenced, and wicked sounding, but also heartfelt tracks, and quintessential thrash tracks with guitar work which literally soars; with such an arsenal in play, it's little wonder that Agent Orange is a solid thrash-classic.


I've not actually listened to a huge amount of Sodom before now, so perhaps it would be a little hypocritical of me to tell anyone who hasn't listened to them before to do so. As I always say, just because it's hypocritical doesn't mean it's not right; It's a thrash classic.