I discovered Danish outfit Altar of Oblivion a few months ago as I quested on a search for epic doom metal. The band were, might I add, one of the discoveries I was more pleased with, and I noted that they were releasing a new album - good news indeed. The album, of recently, can be streamed in full on Bandcamp, and while I'll be getting a physical copy when I can, I've decided have a listen to it now, and see how it compares to their debut. 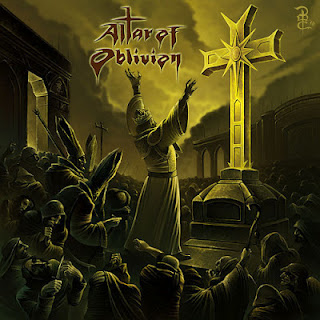 One of the first things to catch my attention with the first album, and indeed, with this one, are the distinctive riffs - ranging quite a lot in tempo, from the traditional doom trudge to a faster manifestation, more akin to traditional-metal, which, I've come to note, seems to be something which epic-doom bands tend to do. The songs are extremely rhythmic, especially the opening track, which has the steady pulse of a mighty hammer crashing into an anvil. This makes it, and many of the similar tracks on the album, rather memorable and very punchy and hard-hitting; The songs definitely lend themselves to head-nodding, with the rock-hard guitar and thunderous, uncompromisingly solid, powerful drumming really pushing the songs along in a mighty swagger. While the album is very, very short, especially for a doom-metal record, a mere thirty-five minutes long, it really manages to pack a lot of top quality music into that time, and it's fairly clear that despite it's shortness, plenty of effort has gone into it's construction - The songs all stand up for themselves as well-written, and most importantly, excellent sounding, works, with expansive soundscapes, superbly panoramic production values, and a sense of very honest epicness, the kind which epic doom has mastered over the years. I'd venture to say that there's not a single filler track in the album, including the two-minute acoustic one, which based on it's length alone, looked like it might be until I actually heard it. The albums content certainly atones for it's shortness.

Two of the things which really set the album apart from the other epic-doom bands of today is the music's flow, and it's tone; The songs don't hesitate or pause, and the production really captures the solid tone which the band use - the instruments are captured in all of their glory without losing any of their earthly feel. One of the highlights of the album, and the band in general, is the vocals; extremely powerful, mid-range vocals deliver some devastatingly memorable vocal hooks and brooding choruses, fitting wonderfully with the nature of doom metal. Fitting somewhere between Peter Steele and Hansi Kürsch, but also unique in their own right, I'm certainly impressed with the vocal delivery, which works well in all of the album's sonic environments - from the striding glory of the opening track to the melancholy of the last. Like the last album, the band make use of a tastefully refined amount of synth - not too much, as to make the sound flowery, but enough to imbue it with a little extra atmosphere; In this case, the band seem to have gotten the balance rather well, which pleases me greatly - too often I hear bands who are simply using synth badly; as a lick of paint to cover up inadequacies. Altar of Oblivion, however, do it properly.


All things considered, this album is definitely a worthy follow up to Sinews of Anguish, and while it's a shorter album by a good twenty minutes, It's still got the same strength and atmosphere; It's as good as I hoped it would be.