Admirably, Skullview, having formed in the mid-nineties, are one of those bands who were intent on making traditional-metal at a time when very few bands were. Today, however, I'm not going to look at their late-nineties works, but instead at what is currently their newest album, 2010's "Metalkill the World". The choice was mainly random, although I'll admit that the albums name did hold some influence over the choice. 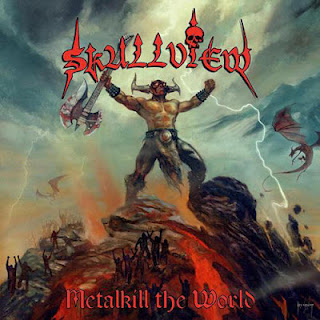 Skullview have a very orthodox approach to traditional metal, with a musical persuasion, and indeed production values, which would have had me thinking that the album was a product of the eighties, and not two years ago. The whole album has a rough, tough feel which I was beginning to think bands just didn't make anymore, until this band in particular came along and demonstrated otherwise. Leaning on the anthemic, epic side of the equation, with fist pumping choruses and massive hooks,  but at the same time holding a ballsy, fun,  rock n' roll feel, old-school is probably one of the first and foremost terms which the album can be described. Often, that phrase, old-school, can go hand in hand with unoriginal, but not in this case. The band are certainly not derivative - Skullview also posses more uniqueness than one might expect - their style feels quite distinct. At the very least, it's quite safe to say that the band don't sound overtly like a clone of any older bands which I can bring to mind. One of the foremost things to set the band apart from the crowd is the sheer virtiol which their music has; Yes, they play traditional metal, but the amount of acid in the sound is fairly noticeable immediately, especially the melodic but at the same time very enraged and passionate vocals.

The albums tone in general is also very rough, but undoubtedly in a good way, with the minimal production making the music infinitely more earthy and honest than most of the heavily-produced traditional metal acts of today. The guitars have a real feeling of crunchiness, while the drums sound incredibly solid and percussive, as drums should. This solid, no nonsense aspect of the music is probably the element of the bands sound which catches my attention the most, and it's certainly well-done; whatever the tempo or style of the song in question. This is probably just as well, considering that the band explore all of the tempos at which traditional metal has been tried and tested, everything from swift, energetic belters to swaggering behemoths in which every chord feels massive. Everything in the album feels very right, and most of all very metal. Like Manowar, Skullview aren't afraid, as the title suggested, to use metal as a lyrical theme. Maybe not as catchily as Manowar do, but Skullview manage to make it much less cheesy and gimmicky - at times this album actually made me sit up and get the "fuck-yeah, metal" feeling which I'm sure all of the readers will be vaguely familiar. Frankly, what more can I ask of an album than for that.


I can safely say that this is an album I'll be listening to again in future, and indeed one that I'd recommend to anyone who likes good old traditional metal; Skullview seem to be quite little known, and, having listened to this album, there's really no reason that this should be the case.