It can never be an objective fact, but Leeches of Lore may well be the single best band on the planet. Any band which opens an album with a track called "Afghanistan Banana Stand" has a similar chance. I wouldn't mistake the band for a joke-band, however, and their third studio album, Frenzy, Ecstasy, which will be followed by a hiatus, demonstrates that, first and foremost, making musical lunacy is, in fact, serious business. 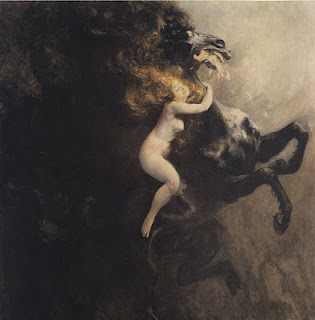 If you've never listened to the band before, you may not know what to expect. This is a fairly reasonable state of mind to be in; Leeches of Lore manage, regardless of what you expect them to sound like, to sound completely unlike it. Purportedly a speed/thrash metal outfit, the band incorporate such an enormous number of diverse and interesting influences that they keep to this label in the way that a box marked "apples", which contains two apples and fourteen bananas are stored can be considered to be an apple box. In a good way. One of the most notable influences the band have is a country and western feel; perhaps I use the terms wrongly, but upon listening, you'll probably work out what I mean; Songs like "L'evoluzione dei Microbi" make this immediately apparent, with a sun-baked, high noon feel, even incorporating some brass instrumentation amid the fairly restrained use of heavy guitar and other such metal elements. On the other side of the coin, there are sludge-metal style elements, reeling psychedelia, acoustic guitar in varying styles, and atmospheric sections, all of which, while overtly desperate from one another, still somehow work together in a relatively cohesive album, which, I can safely say, takes someone with a much greater knowledge of quantum mechanics than myself. Some, I feel, may well suspect the band of taking enormous amounts of drugs during the song writing process.

At this point, it's probably well worth mentioning that the sheer variety and weirdness of the album isn't superficial or gimmicky; when I listen to the album, I get a very strong sense that the music simply works, not so much a collection of different sounds, but an alloy; somehow drawn into one single overall style, which is, for obvious reasons, unmistakable, considering that no other band I've ever so much of heard of have made music quite the same as this. The sounds aren't so much sporadic and crazy as clever, which, pleasingly, seems to be juxtaposed with the fact that at the same time, it sounds very, very natural and unpretentious. It takes a few listens to get used to, but then, with me quite suddenly, it all seems to come together and sound right, like a Rubik's cube being suddenly, unexpectedly completed. An undoubtedly strange, surreal and mind-expanding musical journey, but oddly one which flows very smoothly; many albums can be like rivers, but the river that is this album flows akin to non-euclidean spaghetti. In the best possible way. I've not done as much description as I sometimes do in reviews, for two reasons; one is that the band is hard to describe in the first place. Two, is that it'll make you more tempted to take a listen yourselves, which I think would be a good idea.


I'm not sure what to say in conclusion. Leeches of Lore are one of those bands which will almost definitely make an impression on the listener, and while they're going on hiatus, we've got three albums to listen to until they come back.

This is 9/10 material - unique and fascinating.