I'm glad I keep a piece of paper with a multitude of band-names to potentially review in future written on it, otherwise, I'd probably, and unfortunately, have forgotten about Wilds Forlorn in the maelstrom of names which float around my head. Wilds Forlorn was the name which felt best to peruse whilst I was wondering what to review today, and considering I've been in the mood for black-metal for a while, it seems rather apt. 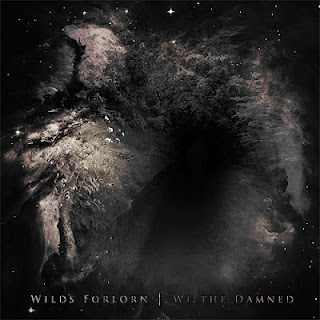 Like so many black-metal outfits, Wilds Forlorn is the work of one person. In the case of this project, however, there's certainly a sense of cohesiveness and tight-musicianship which is less common on the one-man-black-metal circuit. The music as a whole is well-produced, with an extremely high degree of professionalism and attention for detail, which is admirable, and certainly fits the music's take on atmospheric, epic black-metal well. The clean guitar tone gives you the feeling that the notes are made not from the jagged rock of the more caustic variations of black-metal, but instead from smooth glass; that's not to say that there isn't a degree of roughness, but the whole album has a very effervescent feel, and the majestic, soaring, and grandiose air which I'd expect from atmospheric black-metal. In creating this atmosphere, the synth works well, used sensibly, not excessively, which has always been one of those things I often say; the best kind of synth is subtle synth, and for the most part, We The Damned is an album in which the synth is subtle to an enjoyable, but not inaccessible, degree. While I'm talking about keys, I find the heavy use of piano interludes to be quite refreshing, and certainly imbue the record with it's own flavour and direction. Yes, piano interludes have been done before, by many bands, but there's always room for a few more bands to do so.

One of the things which jumped out at me about the release, aside from the amazing-looking artwork, was the occasional, and not unwelcome, break which the songs took from the traditional "wall-of-noise" style which a lot of atmospheric bands utilize. Here and there throughout We the Damned, there are sections with a bit more jump to them, and while the album does use a lot of sustained sounds, there are a few punchy sections which whip around a bit more; Towards the end of "Traces", for instance, there is a riff which is positively bouncy and energetic. To juxtapose, another thing which made me sit up was the stirring and dark spoken word at the end of the title track, accompanied by minimal instruments, and the sound of rain, it took the album to the darkest, but perhaps also most beautiful place it had yet went to. The fact that only instrumental work came after it gave it a real feeling of finality, and certainly gave the album a dark but serene ending. I'm not sure if the album has an underlying story per se, but it certainly feels narrative, with the album slowly descending into darker, more momentous tragedy, far darker, in fact, than I initially anticipated, and, what's more, an interesting musical stream to be washed along.


I wasn't sure what I was going to get when I listened to this album; frankly, in the months since writing it on the list, I'd actually forgotten what the project sounded like. I was reminded today, that it's a damn splendid album.