A long time ago, when I was only just getting into metal, I somehow stumbled upon Artch. Not a well known band for the metal novice by any means, in fact, a rather little-known and doubtless underrated Norwegian power/speed metal act who released two albums in the late eighties and early nineties before vanishing into obscurity. Before you ask, I have no idea how someone who at the time only knew half a dozen metal bands managed find Artch, but frankly, I'm grateful. Another Return is the bands first album, and is considered quite a cult classic. 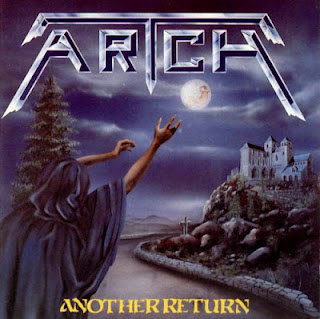 Tenuous an observation as it may be, this album reminded me, and still does, somewhat, of Ride the Lightning. It's not just because the artwork is the same shades of blue, either. While the songs are more on the speed-metal side, lacking the more intense thrash sections, the guitar tone bears a real similarity to said album, which, might I say, is almost certainly a good thing, whether is is a deliberate artistic decision or not. Another Return has a really honest crunch and toughness to it's guitar work, with solid, earthy riffs and a delicious reverb which has the effect of making heavy-metal guitar sound that little touch better. The songs typically have a mid-tempo fist pumping feel, with nice crisp chords with some real bite, and a fairly noteworthy catchiness; It's safe to say that most of the songs on the album don't take too long to sink in. The album, in fact, spends by far the most of it's time in the aforementioned mid-tempo region, but fortunately, this doesn't mean it leans towards being insipid; more that the band really manage to showcase just how much you can achieve without playing at breakneck speeds. While the tempo goes up occasionally, and indeed sounds good in doing so, I'll definitely submit that Another Return really takes the mid-tempo and gets the best out of it, While it was released in the late eighties, the album still has that decades distinct flavor, with a real sense of rock n' roll attitude, before it became cliched.

There's almost, I'll tentatively speculate, a hint of glam in the mixture, or, at least, themes in common with it, and something of a sense of the cruising, epic, and just-a-little-bit cheesy feel to it. Not cheesy enough to be bad, but enough to be very fun to listen to, but simultaneously, retain an earnest metal roar - A good balance, I'd say. Artch, while little-known, are certainly a name which you do hear from time to time, and I think this album is probably the reason for that. It's hard to describe, but there are albums, and there are albums. Another return is, as first albums can quite often be, an album which feels very complete and carefully considered; The album flows well, and the songs are, for the most part, very good. The juxtaposition between the darker, heavier material, and the rock n' roll, ballsy,  probably-on-the-Vice-City-soundtrack style material is quite noticeable in places, and puts a few bumps in the albums smooth flow, but other than that, both kinds of song in their own right are enjoyable and are quite indicative of a band who've put effort into writing them. They even manage to fit a few metal ballads into the selection without sounding too derivative or generic, which, as anyone who'se heard how similar generic metal ballads tend to sound, is quite a feat.


It's easy to look at a band who vanished into obscurity and say "I think they'd have been huge if they'd made more albums". The truth is, it's easy for a reason, that being that quite often, it's true. Maybe not with every band, but I think albums like this certainly fit into the phrase.