Solo projects tend to be a risky venture. While I intend to be impartial, I may as well make it clear from the onset that I'm almost always skeptical of them. Granted, I've heard plenty of good side-projects in my time, but I definitely still lean on the side of guilty until proven innocent with regards to them. On trial today is Steve Harris, or, of course, Iron Maiden fame, and his solo album, "British Lion". 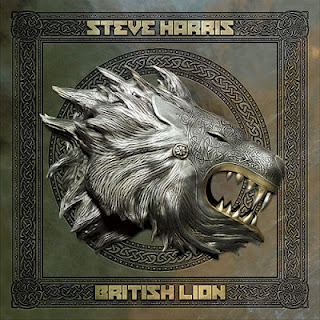 What is immediately made apparent, mostly by the Velvet Revolver style opening riff of the album, is "A", that this isn't going to sound like Iron Maiden, and "B", this is leaning on the rock side of the equation, not a metal-record in the broadest sense. The reception of the stream of the album, available on the oh-so-frequently-not-about-Metal Hammer web-page has, at least in the online watering-holes I frequent, been met with rather a lot of dismay and criticism. I'm very uncertain what to hold as a personal view, but I'll say what I can. I admire the album greatly as quite evidently being exactly what Steve Harris wanted it to be, and not trying to please anyone, or at the very least, not trying to please Iron Maiden fans, in other words, defying the popuation of a small country. Iron Maiden fans on Facebook, incidentally, outnumbering the population of Scotland. However, while the music may not be metal, and definitely not be Maiden, there's still an overt sense of Steve Harris about it  - Solid, intricate and well-written bass-lines permeate the whole record, adding a fairly unique, slightly progressive character to what, otherwise, is fairly honest, mince-and-tatties hard-rock, which, incidentally, is bedecked in more wah than the average Kirk Hammet solo, albeit with the crucial exception of actually sounding vaguely effective.

While the album is undoubtedly far removed from the average and considerably metallic expectations, there's definitely a solidity to it; The songs are quite well written, certainly sufficiently to rise them above the level of being simply a throw-away album. At the same time, of course, the album's character is jarring, odd, and a little bit peculiar; It's not what I expected Steve Harris to do, and I doubt it's quite what you expected either - certainly, I'll be honest and say it's not the kind of thing I'd check out at all if it wasn't by a musician I knew. Typically modern sounding, catchy hard rock - a strong hint of metal, yes,  manifesting itself in the style of the riffs and arrangements, and indeed a (perhaps subtler) hint of Maiden in places, for instance in the melodies and in Steve's unmistakable bass-lines, but nonetheless, the album definitely isn't what I would have expected, had I actually remembered it was being made at all before yesterday. Much like many side/solo projects created by huge names, I'll be honest and say that I have no idea who the other band members are, but I'll also venture that respect is probably due to them; The vocalist has talent, with a melodic, but decidedly not-metal take on his role, (most of the time, anyway; there are some intense moments, I grant you) and perfectly competent musicians providing guitar, keyboards and what appears to be a team of three different drummers who worked on the various tracks. Apparently the bassist was in quite a big band, but I'm not sure.


It's really not too bad. Really. I can't imagine everyone is going to like it, especially the fans more grounded in the overtly metal side of things, or indeed those expecting something which sounded very akin to maiden. I'll be honest - I probably won't listen to it again, and all in all, it wasn't particularly exciting, but when all is said and done, I felt no revulsion or disdain for it. As I said, It's really not that bad.