Usually, or, as far as I know, when bands have a doom-metal influence, they play whatever genre they mainly play, but a little slower, and well, doomy. Whenever death-metal comes in to contact with doom, this rule breaks; what you get instead seems to be death metal with slow bits and bits which remain equally and uncompromisingly fast; a much evenly less mixed creature than many hybrids. Asphyx, I hasten to add, are one such example. 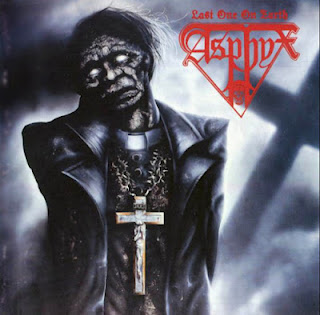 I'd been meaning to listen to Asphyx for ages, being a massive fan of van Drunen's work in Hail of Bullets, it shouldn't have taken me as long as it did. I'm glad I did; Asphyx, like Bolt Thrower and Benediction, have a great feel of pure European solidity in their music, that is, a feel which American death-metal, with the exception of a few bands, tends not to have. I can't really think of a different way to describe it, but considering that most death-metal fans are less new to the genre than myself, I hope you get what I mean. Last one On Earth tends to be regarded as one of the band's finest works, and consequently, it was the first album I listened to. While I'm far more familiar with Hail of Bullets, van Drunen's shrieking vocals were instantly recognizable in their anger and wailing sound; high-pitch and differing from the stereotypical growl, but none-the-less very brutal and powerful, giving many of the band's songs, especially faster ones, like this album's thousand-mile-an-hour storm "Serenade in Lead" a rabid feel, as the intense vocals lead the music to rip out of the speakers, wrapped in the enveloping, murkily heavy guitar tone, which really suits the death-metal style, and carries a rock-solid feel, albeit with a level of clarity which makes the riffs distinct and the intricacies visible.

The album nicely showcases the relationship between death and doom metal, with tracks which are slow, tracks which are fast, and, more typically, ones which combine the two; The swaggering, crushing doom of, aptly, "The Krusher" bursts into an all-out oldschool death-metal assault as the song progresses; the tone and feel of the music successfully remains the same throughout the tempos, which I consider to be a sign of good song-writing; not only making the album flow well, but making sure that it's character is enjoyably consistent. Another thing which it seems to demonstrate is that tempo is certainly not a factor which isn't overtly invested in heaviness; both the slow and fast sections of the music are crushing, which certainly goes a long way to explain why juxtaposed bands like Sunn O))) and Anaal Nathrakh are both considered very heavy. Anyway, this review is not to examine the concept of heaviness. I digress. Death metal quite often flies right past me, and isn't memorable to me, but Asphyx' material certainly sticks in my head nicely; The hooks, riffs and all of the embellishments in-between are very addictive and most of all, memorable, which is perhaps a symptom of the European approach to death metal; My top five death metal bands are, at a given time, predominantly almost entirely from Europe.


Asphyx, I'll definitely say, should be required-listening for anyone who enjoys oldschool death-metal, and beyond; listening to this album in it's memorable, solid and excellently written persuasion, I practically wish I'd been introduced to the genre with it; it might have sped up the process of me getting into death-metal quite a bit.