Cosmosophy marks the final instalment in Blut Aus Nord's ambitious 777 trilogy, coming after Sect(s) and The Desanctification. I've not listened to all of Blut Aus Nord's material, by any means, but they're certainly a band I've been taking a growing interest in over the last couple of months, and I was intent on listening to the latest album when I got the chance. That happened to be today. 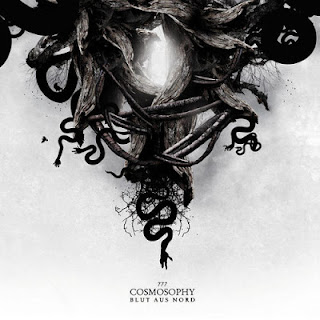 Blut Aus Nord have never, ever been a band afraid to be ambitious, and the 777 trilogy is equally so - perhaps even their most ambitious work. If there's one thing which the albums I've listened to have taught me, it's that the band excels at making music which combines beauty with an unnerving and ethereal feel, and all of the albums by the band which I have heard have managed to do so. Cosmosophy is, however, by no means simply more of the same. The first and foremost impression given is of an album which is less overtly intense, spending more time dwelling among passages of slow atmosphere. The sharp and almost scary atmosphere has also receded, compared to, for example, an album like "The Work Which Transforms God". To top it off, the album has a very pronounced supply of clean vocals, which give the music an entrancing, weaving, but at the same time more benign feel. I'm not going to cast these changes in a negative light, however - frankly, I found the soundscapes of Cosmosophy to be relaxing, and utterly beautiful, albeit far removed from the more raw, dark beauty of many of the previous works, which, I won't deny, I find to be just as enjoyable. The tone, mournful and thick, which Blut Aus Nord posses, is, as ever, entirely present, and as far as I'm concerned, it would take a lot more than a slight stylistic change to do any harm.

One thing which really attracted me to Blut Aus Nord in the first place is the way in which the notes bend, hauntingly. This may sound like a small detail, but it seems to be one omnipresent within the bands sound, and give the band a very markedly unique tone - absorbing, and with a soothing, whale-song like quality which I've never really heard anywhere else in music. An interesting thing about Cosmosophy is the sheer emphasis which is places on this style in it's purest form, with unobtrusive mid-tempo rhythm utterly dominated by note after note, wailing and weeping. The other influences in the album are also progressions upon what the band have done before; In all of their material I've thus far listened to, the drums have an industrial feel, sometimes overt, and sometimes subtle, and Cosmosophy is no exception - in parts the music sounds positively electronic. Usually, I'm weary of industrial influences, with a few exceptions, but Blut Aus Nord have managed to get it roughly right - not so industrial as to be off-putting, but enough to inject further an already unique style; The sterile but dynamic drumming really give the music a feel which earthy sounding drumming could not - that is, it keeps up excellently with the unearthly and unnatural feel of the bands music.


Much of Blut Aus Nord's discography, to me, is still to be explored, but I'm almost utterly certain that I will be listening to every last song eventually. Cosmosophy isn't fast or fierce, but what it is is wonderfully atmospheric and hypnotic. A solid album by anyone's standard.