To get the unpleasant taste of reviewing metalcore out of my mouth, I decided to review something very, very metal today. I've been on something of a spree of listening to dirty, grimy thrash and speed metal recently, and Bunker 66 has been one of my several new discoveries. I was obvious that their 2012 début album, Infernö Interceptörs, was going to be a rock and roll white-knuckle ride, and one with real balls. It was probably the umlauts that gave it away. 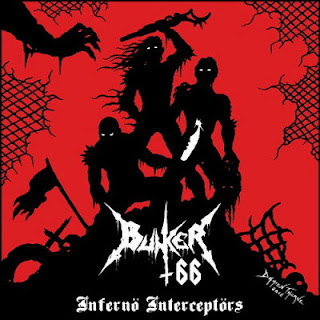 Black-thrash, in all of its forms, is something I've enjoyed for a long time. It's a versatile genre, and really one in which the imagination of the musicians is the limit to what the they can think of incorporating into it's sound. I especially like it when there's plenty of speedy, ballsy punk influence mixed in, and that is precisely what Bunker 66 have done. Infernö Interceptörs is a short album, and one which  may zip past, at under thirty-minutes long, but it zips past with style; not slight and forgettable, but roaring past like a massive motorcycle, leaving a trail of dust and empty beer cans in it's wake. If the music didn't make it clear that it's overtly dirty and old-school, there's a picture in the album-booklet showing the band standing around a shrine with Bathory and Venom LPs on it, just in case you needed evidence. Predictably, the album is raucous, loud and filled with attitude; The rough, raging guitar and wholesomely clanking bass really give the music a larger-than life feeling of momentum and power, and the solid but not overproduced drums help this along. The booming, echoing vocals are also bursting with energy, and sound fantastically burly. It's a nice change from the usual shrieks or growls of black-thrash, and certainly gives Bunker 66 a level of uniqueness and distinctness, and above that, an air of infectious and rough-cut enthusiasm - The whole band sound like they're having a good time Even before I was into metal at all, I had a vague idea of how a band was "meant" to feel while they played; rock n' roll, denim and leather, sunglasses indoors, and bottles of beer ever present. Bunker 66 have nailed that.

There's plenty of variety through the album too - The band play mid-tempo swaggering riffs that are catchy, fun to listen to, and probably fun to play too. The band also release absolute belters which have the speed and intensity to tear you a new one, with all of the ferocity of thrash meeting the grime of black metal, punk, and unapologetically unpolished rock and roll. There's also an interesting blend between the crushing black-metal style sections and the overall punk vibe, which I've not heard anywhere else - the songs aren't particularly dark, as black-thrash goes, but at the same time, they're not outright free from the frost and caustic edge which the black-metal side of the family gave it. While there's a lot of attitude in places, there are certainly songs which are more oppressive and brooding - the whole album is thunderous, but it sounds especially effective in these, and when you listen to the riffs, a dark black-metal essence leaks out, until being dispelled by a chorus or one of the catchy solos. The album really encapsulates what I enjoy about the first wave of black-metal for a new generation - Dark, evil, but at the same time, not turning it's back on rock n' roll, punk, and tangible human attitude. To top it off, I don't think there's a single song I didn't enjoy on the album.


There's not much more I can add, to be honest. I've already been sitting trying to think of what to say next for about half an hour, so I'll come to a fairly blunt conclusion; Infernö Interceptörs is a solid album, and one I've really enjoyed personally. I recommend it to anyone who likes their metal old-school.