If I were to make a chart comparing the number of people who have listened to Venom's post-2000 material, and the number of people who listened to 1997's "Cast in Stone", the bar representing the former would probably loom menacingly over the bar representing the latter. When I started writing reviews, I told myself I'd be aiming at highlighting what I consider to be underrated albums. I've not been doing that very much recently, which is why, when I listened to Cast in Stone, I suddenly realise that not only did I have the opportunity to review something I saw as underrated, but that I probably should. 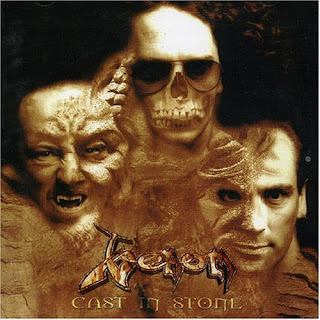 There's definitely something which sets Cast in Stone apart from the rest of Venoms later material. It just doesn't feel a part of the same era, despite having a similarly modern sound. Despite being barely three years earlier than "Resurrection", there's a feeling of apartness which certainly makes the album easy to overlook, which is certainly what I did for a long time. Certainly, an album like "Resurrection" seems to herald something - the bands return, which, in hindsight, seems very odd, considering that Venom had by that point already returned three years previously. The point is, I think, that Cast in Stone is very much an album out on it's own, and inaccessible as such - it doesn't, and didn't when I discovered it, lend itself well to attracting attention. Ultimately, this is a shame, as far as I'm concerned. The album has the same energetic, and surprisingly solidly-produced work as Resurrection, which, had I been told that before blindly listening, would have been a major selling point. While the modern, thrash-esque sound which the band took on both albums isn't to everyone's taste, Cast in stone still sounds undeniably like Venom, and a very energetic Venom at that; I can't tell if the band improved as musicians in the time that they weren't busy doing Venom-stuff, or if they were just more technically ambitious, but either way, there's little of the fuzz and haphazard madness which was present on the bands eternally-classic first couple of albums. Cast in Stone certainly seems to be a happy-medium; it sounds more like vintage-Venom than the later albums, but at the same time, manages to be subtly, but at the same time very different from the early material.

That's not to say that the album is an ultimate opus, or anything of that persuasion; It's certainly not perfect, and, if you're anything like me, there will be times when you'll really wish that Mantas hadn't discovered the harmonic, but at the same time, the album is a solid work; the songs are nicely rounded, and while they don't tend to be adventurous, they're nonetheless satisfying. The style which modern Venom takes, to me, seems to be the joining of two things; the more traditional and sane route which the band went down when it lacked Cronos, coupled together with the return of Cronos, but, like an imaginatively assembled sandwich, you can put two things back together in a different way to how they were when they were taken apart; Venom gain back some of their raucous and wild sound, but not all of it, and ultimately, the Venom we get on Cast in Stone is a thoughtful one. The riffs slot together nicely, with more emphasis on the spaces between the notes and drum beats than the bulldozing barrage of the early material, which certainly makes the music dynamic and definitely more memorable than say, an album like "Possessed". Another element that the time apart seems to have imbued in the band is a bit more or a penchant to experiment, which, while it didn't seem to last past this album, definitely had some interesting results. There's a bit of a vein of industrial influence running through the album, and there are a couple of songs, namely the albums closer "Swarm" which really go somewhere with it, and while unexpected, it sounds genuinely interesting, and is enjoyable to listen to, despite appearing seemingly from nowhere.


I've not listened to Cast in Stone as much as "Fallen Angels", or "Resurrection", and certainly nothing like as much as the first two albums, but at the same time, I've already gotten a great enjoyment from it - While it doesn't stick out of the bands back catalogue, I'll certainly go so far as to call it a gem, one which more people should get around to listening to.