#224 Maximum Oversatan - Too Evil for Hell

Sometimes, bands and their releases can be absolutely intriguing, and Maximum Oversatan are one such band. As the forum post which introduced me to the band said, "They sound like their name". Frankly, that was enough to get me interested, and if the name hits the same switches in your head as mine, you should be too. The normal order of things is that bands ask me if I'll review their material, but not this time. At risk of sounding like a cheeky bastard, I directly asked for a link to their demo so I could listen to it and review it, and that's precisely what I plan to do. 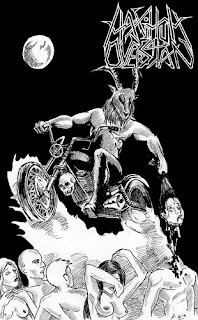 Picture, if you will, what would happen if a band were to travel back in time and distil the essence of a 1986 not-quite-black-metal-yet Mayhem, and then, to gain incredible devilish metal powers, drink it, presumably with Jack Daniels. Maximum Oversatan are a bit like that. Speed metal, with more than a touch of black-metal thrown in to the recipe. Raucous, raw and with a motorcycle-riding, greasy and dirty sound which the demo's artwork, and the bands name, as I've already mentioned, really encapsulates. The whole demo is a glimpse into a mad and rather satanic world of chaotic, percussive and rabid metal - Thundering drums carry the swift, vicious tracks along with a possessed energy and natural, but also very thick forceful and solid presence - it may be a demo, and quite a raw one at that, but the drum sound is certainly one to be admired - Clearly drums that have been recorded well from the onset, as opposed to meddled with excessively afterwards. Soaring angrily over the percussion, the vocals are caustic and enraged sounding - not strictly a conventional black-metal shriek, but something frequently deeper and more gruff, a harsher and more bestial version of, for instance, Venom, as opposed to a shrill and piercing screech. This has the effect of giving the music quite a muscular edge, which is enjoyable to say the least, and makes for a more raucous and meaty listen. Adding to this is the guitar tone, which while quite treble-heavy, also has a lower end with a rasping, buzzing tone which makes a number of the riffs into the sonic equivalent of an iron fist.

You can tell a lot about a band by the songs which they choose to cover, and on Too Evil for Hell, the covers probably say a lot more than I possibly could about Maximum Oversatan's musical direction. Going by their sound, I can't say I'm surprised by the presence of both a Sodom cover and a Venom one, both of which are done with an enjoyable level of creativity and spiced with Maximum Oversatan's own style, particularly "Welcome to Hell", which the band have taken and made into perhaps even more of a swaggering, spitting occult monster of a track than Venom made it the first time around. Being a demo, one might expect the production to be a little bit rough - and it is, there's no denying that. At the same time, there's not much point in denying it, because the rough and haphazard production fits the music's coarseness like a glove, in fact, I'd be happy to hear an album or EP with this level of neatness, or enjoyable lack thereof. The guitar tone is a little bit buried in places, although in others it sounds great, which suggests a bit of inconsistency in the volume levels, but given that the whole demo is something of a maelstrom, it doesn't have too much of an effect on the balance and flow of the demo. Perhaps the original songs aren't quite anthems or instant classics just yet, but the whole demo has a real sense of solidness and an attitude which metal can never have enough of.


A few refinements, perhaps, and Maximum Oversatan will have a winning sound on their hands, a breed of black and speed metal which makes for dark and savage, but also ballsy and memorable music. I hope they have plans for the future, and I can't wait for they day they decide to unleash it into the world.