Usually, I'm terribly suspicious of bands with numbers in their name. What's more, 3 Inches of Blood have a bit of a reputation as an entry-level traditional metal band, and as such, I quite often encounter people rather suspicious of the quality of their music, or their recently-converted-to-metal fan-base. Nonetheless, I, for one, while I can't claim to have listened to all of their material inside-out, do enjoy it. I was sure I'd reviewed the band already this year, but apparently not, so here's a review of their 2012 album "Long Live Heavy Metal". 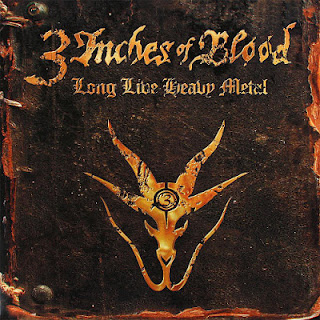 The bands journey from what I'm told was a metalcore one to one which plays what is, essentially, Painkiller-era Judas Priest for the new generation, has been an admirable one, and also one which has stripped the band of all of their founding members. Literally all. I digress. I hadn't really listened to the bands previous releases enough to know what to expect, aside from some very ballsy traditional metal. Not distorting my perceptions too much, that's exactly what it was; Riffs ranging from a speed-metal onslaught to a rock and roll, fist-pumping extravaganza, all tied together by the screaming-eagle Halford style vocals, which really exude the falsetto-driven rage which speed metal and traditional metal can do well. I wouldn't mind something a bit more subdued in places throughout the album, in more than just "Men of Fortune", especially when the vocals seem to be raised above what the song calls for, and become incredibly, perhaps slightly too, attention-grabbing. Regardless, for the most part, the vocals work rather well. The harsh vocals in places definitely hint back to the band's past, and come as something of a metalcore after-taste, but I cant fault their deployment - snugly incorporated into the music, and not too out of character, compared to the retrospective "What on earth was that" which I now get from bands like Holy Grail.

All in all, I think Long Live Heavy Metal is definitely a 100% heavy metal album, which is only a good thing, as it would be rather ironic if it wasn't. There is, however, a fairly noticeable modern edge to 3 Inches of Blood's sound, which fairly quickly dispels the idea that the band are entirely geared towards playing in a retro way - There's plenty of rapid double-kick, thrashy riffs in the vein of bands like Iced Earth, and a general feel of the twenty-first century about the album, with crisp production, and a very aggressive and somewhat mainstream-friendly style. I wouldn't fault them for it though - managing to appease the legions of metalcore and groove-metal loving teenagers is certainly an admirable feat for a band who play nothing short of quintessential genuine metal despite such success. In fact, 3 Inches of Blood, I'll venture to say, really give an injection of what a lot of people love about traditional metal - Catchy riffs and hooks, melodies which propel the music nicely, and an album which flows straight and smoothly. The whole album, in fact, is catchy as hell; Perhaps it's not the most intellectual traditional metal record out there, but all things considered, who would want it to be? And while there may not be a track quite as iconic as the known-to-all anthem Deadly Sinners, I can safely say that Long Live Heavy Metal was an enjoyable listen.

Heavy metal, in this style, is supposed to really grab you by the balls, and it's fairly safe to say that 3 Inches of Blood manage this quite well. While many judge the band, for reasons best known to themselves, I have to say it was an enjoyable experience.