There is, I'm fairly positive, something in the water in Canada. Something in the water which makes for very good heavy-metal, the nation has, for instance, contributed a superb slew of bands towards the "new wave" of traditional metal. Cauldron are one such band, and a notable one at that - their third album, Tomorrow's Lost, was released in October, and I've been looking forward to reviewing it and having a good listen for a while. 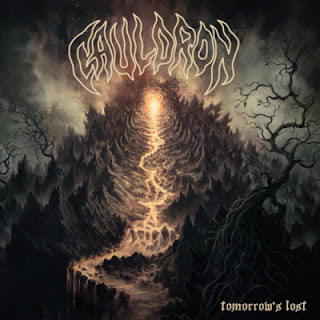 Since 2009, Cauldron have released three full-length albums - an impressive work-ethic, and something which you don't see very often in these times. What I find to be more notable, however, is the fact that, despite releasing three albums in four years, the music at no point sounds rushed, and this album is no exception. I'm never good at explaining why song-writing seems good to me, but I'm definitely of the belief that the song-writing which Cauldron offer is still top-notch.  I've always found Cauldron's brand of heavy-metal to be an enjoyable one, with a more anthemic and fist-pumping quality to the music when compared to the nigh-infinite multitude of Iron Maiden and Judas Priest clones which amount to a large proportion of the bands which are reviving traditional metal. Tomorrow's Lost is more akin to the works of bands like Accept, Dio, and many of the early eighties acts which were out-with the NWOBHM - there's even a hint of glam in there, or at least, I think so. Consequently, the album is riff-laden, catchy as hell and is a generally fun and memorably listen. The vocal hooks and choruses make almost every song addictive and enjoyable - if I'd familiarised myself with the lyrics, I'd be very tempted to sing along a lot of the time. At the same time, the music isn't just throw-away party metal, either - it's good in it's own right, and definitely the kind of thing which is just as enjoyable when taken seriously as when it is enjoyed intoxicated with a number of friends. That probably says something about the nature of Cauldron's music - it's a little cheesy, but at the same time it can be honest and uplifting metal-goodness, which, really, is what made the bands which have influenced them great too.

Another strength I detect in Caudron's music, which, say, a band like mainstream favourites White Wizzard don't really posses to anything like as much an extent, is variety; Whilst still managing to unite the albums music under one banner (and some frankly epic artwork), Tomorrow's Lost has a genuinely dynamic edge; The tempos go from everything from a riffy, rock 'n roll swagger to blistering and speedy belters, and all with the same character - It's safe to say that Cauldron aren't formulaic in the slighters, and also safe to say that they add a pinch of their own secret recipe to the traditional metal which they are inspired by and play. The whole album flows smoothly, and the individual songs themselves seem also the be very smooth, everything from the shimmering, buttery solos, chunky rhythms with enough balls to run a lottery, and the clean, sweet, perhaps slightly glam-influenced vocals, which really give the album a different edge to the legions of vocalists who want to be Halford or Dickinson. Ultimately, I'll summarise the album as energetic and fun, but not one-dimensional. There isn't anything self-indulgent, pretentious or overly ambitious in the record - it's a lovely chunk of good old fashioned heavy-metal, and it soars along like a good album should.


Cauldron are one of the newer traditional-metal bands which I find genuinely pleasing to listen too, and I admire what they've done; In a genre where being generic is a huge risk, matched only, perhaps by retro-thrash, Cauldron have managed to carve out a niche for themselves, and to stand out from the crowd. They sound damn good while they're doing so, too.