If you weren't around for last month's "That's not Metal!" feature, the premise is simple - every month or so, I'll be reviewing an album which isn't metal, because variety, as everyone should know, is a wonderful thing.

The Pogues are a band known to many as "the band that did that Christmas song..." and known to, sadly, slightly fewer as the band that made a veritable feast of other songs which were great. Before I discovered metal at all, The Pogues were one of the first real bands I was listening to, and this feature has given me the necessary freedom to crowbar a review onto the blog without much need to justify why a predominately metal blog would be reviewing The Pogues. 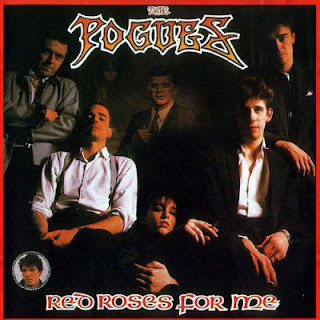 Punk and folk, as a mixture, you might think, are a relatively new concoction, especially if you're a teenager who has just discovered Flogging Molly, and has the slight feeling that he might want to be Irish when he grows up. However, in 1984, The Pogues were already on their way to developing a raucous, inebriated formula. The fact that punk rock and Irish folk work so well together - as two genres concerned by the spirit of their time, be it modern problems like political disillusion or hearkening back further, to the building of the railway, or the whaling industry, both styles seem comparable to the point that someone could probably use their hand-in-glove compatibility as an argument for the existence of god. "Red Roses for Me" was the band's début, but has the feel of a classic, solid record; perhaps more embryonic than the later works like "Rum, Sodomy and the Lash", but at the same time, the album is devoid of filler, and very notably bedecked in variety; everything from up-tempo rants to slow ballads. There are a handful of traditional folk tracks, and about a dozen original songs, and it says a lot about the bands ability to add their own flavour to music when it's not necessarily easy to tell which are which just by ear. The band take many a folk song and accelerate it, crafting it into a more raucous, rock n' roll entity which oozes a punk vibe along with the folk melody and merriness or melancholy, depending on the song.

The same is true of the bands original material on the record; A fierce, trundling punk atmosphere tends to career headlong into folk's jaunty, finger-clicking feel; The end result is a collection of songs which have a sort of slightly out-of-control charm, a lopsided feel, with the punk "I'll play this instrument despite not having played it for long" feel, applied to folk instruments, and a truly note worthy amount of them, too; From a metal perspective, "folk" can quite often mean "there's a violin in there somewhere", but with an outfit like The Pogues, you get all sorts; tin-whistles and fiddle really giving the music an edge of melody, and atmosphere where appropriate. Accordion gives the music a lot of rhythm and at times some real power, especially songs like "Boys from the County Hell" which is quite close to the definition of a belter. The modern folk-punk outfit seems to abandon this variety in lieu of a simpler line up, but The Pogues succeed in sounding coherent despite the crowded stage, studio and soundscape. It pays off, too; the band manage to sound folk-laced to the bone, as opposed to paddling in it lightly, as some bands do, whilst, at the same time, managing to make the songs have a more modern feel.


From more or less the moment I published the first instalment of "That's not Metal!" I was fairly confident that the next one was going to be a Pogues album, and, as it turns out, my prediction was correct. Considering I write these, it's not very surprising. All in all, Red Roses for Me is one of my favourite Pogues albums, and it's been a refreshing chance to write about it - less experimental than their later material, perhaps, but that makes it all the more interesting, seeing what they came up with.