In one word, Dragged into Sunlight are unnerving, and not so very long ago, when I reviewed their 2009 début, that was what really stood out about the band. They're dark, and not in the same way as conventional dark music, or even conventional by the standards of the black-metal which their style is touched by. The band's début was twisted, hideous and somewhat alarming, and, when I picked up it's follow up, "Widowmaker", earlier today, I discovered that the same was true of it. 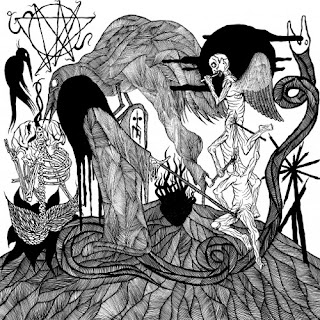 With the album at just three songs in length, no matter how long, it's easy to see why some people are a bit sceptical of it. I can't say I was surprised, personally - Dragged into Sunlight have always had the feel of a band who are going to do their own thing, and nothing else, and this album has once again manifested that. Owing to the small number of constituent songs, but more to the way in which they flow very well as a trinity of pieces, the album really does feel like one, single entity. More so than most, certainly. At the same time, the album is definitely a three-pronged attack. Part I is slow and gradual - chords with a slowly growing sense of fear, tension and unease, but with a serene tone which somehow makes it all the more unusual, like a cocktail of drugs which puts you in a state of limbo, because it's ingredients are trying to send your mind in two directions at once. Despite it's simplicity, I've got to admire Dragged into Sunlight for packing the song with so much charge, and while there may not seem enough going on in it to justify it's length, when it came to an end, I didn't feel like I'd wasted fifteen minutes at all. Part I is packed with easily as much of a sense of foreboding, and foreshadowing terror-to-come as any drone or dark-ambient. All in all, it really builds up to the rest of the album well.

When Part I draws to a close, the more accustomed sound of the band bursts into live; brooding, bubbling and volcanic riffs, filled to the brim with grit, loathing and misanthropy. There's as much of a sense of unease in the heavy side of the band as their is in Part I, with unfettered, depraved sounding screams, and unsettling spoken word, most of which I can't entirely make out, but all of which sounds dark and often twisted. The murky and tangled world which the bands heavy sections vomit forth really are distinct and unique, with the feeling of acrid, sonic barbed-wire, of the heaviest kind. Once in a while, there come the kind of seismic, world churning chords really make your insides reverberate in a way they shouldn't, which sends your brain reeling a bit, through the tumbling and darkly surreal landscapes. Not the transcendent, sky-touching surreal feel of a band like, say, Electric Wizard, but more a sort of impalement on a malevolent barb of noise, which, whilst one might assume it to be unpleasant sounding, actually really makes for a fascinating and rewarding listen. Sonically, the band take the listener to a dark place which few bands have access to, and they do it in quite a unique way. The album may seem short, perhaps stunted, but personally, I found it to be an injection of abject darkness of just the right proportions.


The Widowmaker album is a diverse one, and goes through many flavours of horror, despair and ruination, which is a very impressive work for three songs alone. I'll probably be re-visiting their debut personally, when I can find a copy, and in the meantime, I'm definitely going to listen to, and reccommend, Widowmaker.