I'd love to offer an account of how I discovered Naam, but I literally can't remember. Regardless, it's happily coincided with a time in which I've been really embracing surreal, psychedelic and all together chemical elements in music, and that, I've come to realise, is something that the stoner-metal leanings of Naam manages with gusto. 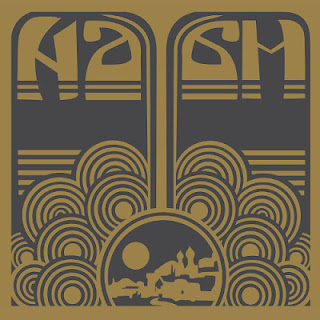 Naam's self titled début gets off to an unapologetically gradual start, unfolding gently to the sound of a relaxing but awakening cosmic breeze, and the occasional flourish of notes. When the first, and by far longest, song on the album kicks in, the bands take on the stoner-metal genre reveals itself to be equally cosmic; fresh, wide, and airy. The band, it seems aren't aiming for the booming, cosmos-destroying closeness which many bands of their persuasion might be - Yes, certainly there are monumentally bass-heavy moments, but the soundscape is vast and comfortable; fresh and airy. The intensity-at-a-low-tempo which a lot of stoner-metal brandishes is definitely still present, but operating under an altogether different set of rules, and the result is pleasantly fascinating. The album as a whole has the feeling of something which is very malleable and free - it's evident that the bands haven't felt the constraints of genre, tempo, or album-making dogma upon them. Sometimes when a band tries to be free in this way, it doesn't work, leading to strange and jarring confections of experimentation, but Naam seem to have done a great job; The sheer variety of approaches works quite well, and instead of being unwieldy to the albums flow, works nicely. It's not a boastful amount of variety, or a gratuitous amount of variety either - it seems integral to the albums reeling, eye-opening soundscape, and certainly, the first time I listened to the album, I had a real feeling of stepping into the unknown when the next track came on, which frankly made me really appreciate the album as a whole.

The album manages to be rather tranquil, in that way which only stoner-influenced takes on metal can - the intensity is at times teeth-grinding, but at the same time, there's a warm and relaxing air to it. While no too songs are quite the same, there does seem to be a universality to them too, bringing them together. Many stoner bands can conjure a haze, but what seems to apply more specifically to Naam is their ability to conjure a haze which shimmers, and that seems to be present on every track in the album. It is, in fact, the kind of album which makes me wish I knew enough about the ambiguous genre of "world" music, so I could apply the term correctly - the album has a little bit of everywhere and everything in its sound. It genuinely sounds like there are influences from a vast range of things, which, more pleasingly, also sound like they have never quite been arranged in this way ever before. They're arranged very competently, at that; there's no oddity when a psychedelic, middle-eastern sounding section segues into a more traditional bluesy, chunky stoner riff - there's not really a sudden moment of "What just happened?" but more a contented feeling of "Oh, that's where the journey is going now". Personally, I find that to be a great sign indeed. When a band can get such a diversity of styles, and make them flow, I'm impressed.


Ultimately, this is an album oozing with innovation, variety, and an immense re-play value; It's the sort of album you could probably listen to a couple of times in a row and still enjoy. Naam, it is suffice to say, is a band I will have my eye on from now on.