Judd Madden is a project I've been following for a while, and new albums, which are released more frequently than most artists, are always of interest to me. "Artesian" is the project's fourth album, and the third one to consist mainly of instrumental doom-metal. I've yet to listen to one which I haven't enjoyed. 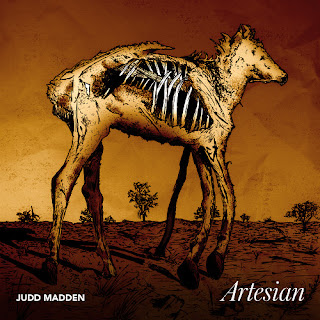 Water has always been a major, if not dominant, theme in Judd Madden's material; From a début album about the water-cycle, to "Drown", which highlights every element of the ocean's deepest murk, there's certainly an underlying feel of it. Based on the cover art, you could be forgiven for thinking that this latest album takes a step away from the theme. This isn't the case, however. Artesian takes a step back and then steps forward again, approaching the matter from a different angle, that of water's preciousness and value in times of drought. The word artesian itself, in fact, means, as I understand it, something akin to a well. Nonetheless, the album is certainly drier than the previous ones, and it immediately became clear that while the tone and style of Judd Madden's work was consistent, it did an excellent job of evoking the desiccating wind, the shimmering haze of heat, and the bone-dry river-beds - A real achievement considering the deep, ominous and aquatic feel a similar sound complimented on "Drown". What the albums have in common, however, is their ability to capture the rawness and sheer potency of nature, this time from a different angle. It's an interesting change, but at the same time it feels like a very solid, enjoyable development in the projects direction. Now the crushing chords and swaying song-structures paint a picture of the crushing weight of the sunlight, and the haze and malevolence of heat, where before they represented well the incessant waves and the flow of the waters.

One thing I've always liked about the albums, particularly "Waterfall", is the sense of narrative which they have. Artesian is no exception, and tells the tale of the droughts of the Australian outback. What's more admirable is how much of a scene the album manages to set with no lyrics or vocals, simply the occasional spoken word sample. It's not unreasonable to describe the albums narrative as a sad story, albeit one with something of an optimistic ending, and the albums length and pace really lends itself to thought - both in terms of thinking about the albums themes; the plight and harshness of drought, the sheer heat and bone-dry air, but also to thinking about anything at all; like the albums before it, Artesian's atmosphere works on a couple of levels; both evoking it's own themes, and creating a soundscape through which you can really let your mind wonder unhindered, which is probably particularly owing to it's instrumental nature, and the hypnotic song-structure, which managed to be both enthralling but at the same time not overly simplistic or repetitive; the music is well written and well thought-through in terms of arrangement, and, as always, has really enjoyable production - the drums sound precisely the way they would have sounded while being played, and the guitar tone is thick and crisp, perhaps more than ever.


Once again, I can safely say that this is another great collection of doom, and one I particularly enjoyed listening to; it's a lengthy album which demands a bit of time to listen to, and is certainly worth listening to as a whole-album, but in the end, it's great.