Whoever releases them, posthumous albums are always sad to listen to, given the circumstances of their existence. David Gold, at the time the remaining founding member of Woods of Ypres, passed in 2011, and "Woods V: Grey Skies and Electric Light" was released early this year. I've not listened to the band before, but I've been meaning to do so for some time. I can't remember what reminded me of them today, but remind me something did, and now seems as good a time as any to have a listen. 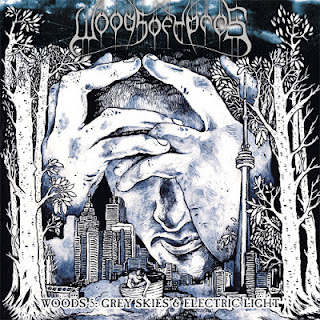 Even before listening to the band - heck, even before knowing anything about the band, it seemed fairly apparent to me that they weren't going to be a conventional one in terms of sound. I don't know anything about the bands previous work, but Woods 5 is an interesting release to say the least. There's a bit of everything in the album, but the end result comes across as something of a black-metal Type O Negative. Like the former, one of Woods of Ypres' most prominent features are the vocals, which go down a rather similar path to that of Peter Steele. In this album, at least (I can't vouch for the others), the deep, powerful clean vocals have an oddly mechanical edge, presumably through the use of some effect or other, which, whilst rendering the vocals rather inorganic, they suit the likewise inorganic and electric aesthetic of the album really well, and, to put it bluntly, sound great. The clean vocals are at times punctuated by a more conventional black-metal style, but these take the back-seat for the most-part. This doesn't bother me particularly, as while the harsh vocals add some freshness and diversity to the songs, the clean vocals are very interesting to explore, and create a very unique and immersing atmosphere. I'm quite frank when I say that there's literally nothing I've experienced which sounds entirely like this, and on that note, I think I can safely say Woods of Ypres were a great example of ambitious amalgamation of styles done well.

For being complex and diverse to quite an extent, It's got to be said that Woods 5 still manages to be catchy, and quite impressively so. A lot of the songs have choruses which could end up stuck in my head for days, or sections which really leave a lasting impression. As opposed to being grating, however, this works really well, and there's still an honesty to the music no matter how catchy - the choruses may be catchy, even pop-like in their style, but at the same time, they all feel like they're building to something, and they have conviction and strength. I feel perhaps I've dwelt on the vocal aspect of the album a lot, and I can safely say it does hit me the most of the bands elements, but of course, that's not to say that the other aspects don't work. There's some really enjoyable guitar work, which helps in the conjuration of the band's unique atmosphere, and a lot of really cleverly deployed musical devices, with plenty of diverse miscellanea, on top of the standard guitar, bass and drums, which themselves stand out as a very solid foundation. There aren't many moments, although there are a few, when they steal the thunder of the vocals, or take centre stage, as far as I can tell, but they certainly do one heck of a job on complimenting them, and I can't deny there are plenty of moments when they are good in their own right, if a little overshadowed for most of the album. On the whole, the album is nothing short of excellent when all the elements come together, and that, without a doubt, is what makes a good album.


I didn't realise that it's coming up to a year since Gold's death when I started writing this review, but I see something of a poignancy. There's a real spiritual feeling in the way that a deceased artist can live on through their work, and what better way to live on than through a beautiful collection of music. There's little more I can say.