I'd never listened to Wintersun before deciding I should see what all the fuss was about. If you're a huge Wintersun fan, it's probably worth bearing that in mind. If you're not, let me set the scene from my own, slightly lacking, knowledge; Wintersun are probably one of metal's most notable cult-phenomena. Despite this only being their second album, "Time I" has been building hype for some time. Considering that it's eight-years since the album before it, it's been quite a lot of hype. 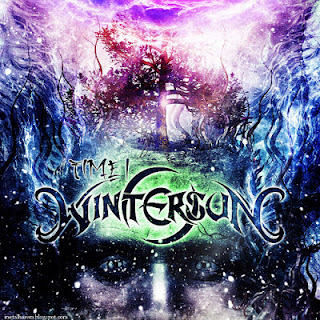 I wasn't sure exactly how the elements of the music were going to come together, and being told they were diverse and, indeed, ingenious. The simplest description I can think of is this; Wintersun are a power-metal band which everyone lied to me about, telling me that they were melodic death metal. If the whole album was in a teacup, there's only about a half-spoonful of melodic-death metal in it. The rest is made up of intricate, complex and mindboggling keyboard-dominated symphonic lunacy. The atmosphere is very overtly beautiful for the duration of the whole album - serene, soaring, and extremely thick, with keyboard melodies slapped on like so much zealous gloss-paint. In this respect, the album frequently runs the gauntlet, along the razor's edge between atmosphere and pure cheesiness, but admirably, it manages not to fall into the latter too badly, with only a few instances throughout the whole record which were badly over-the-top. I emphasise badly because in all honesty, the whole album is over the top, it's just that for the most part it works quite well. It's clear from the onset that, aside from the occasional silvery-smooth guitar solo, or vocal crescendo, it's really the synth which the listener is meant to be enjoying and focusing on in particular. Personally, I'm not usually into synth which is layered so thickly, or produced with such a pristine, porcelain sound. I certainly missed having a few rough edges here and there, but nonetheless, the synth is a genuinely epic element of the music.

The album is quite an overtly technical one, too, which I presume is something the band have been doing since their inception. It's certainly a good deal more intricate than your average power metal, or indeed, floral melodeath album - at times to great effect, with ensnaring and memorable but also sophisticated song structures and melodies which really make the songs deliver a hearty dose of both epic and laden with fancy devices and vignettes to keep the fans with a musical technicality fetish happy. The vocals are satisfactory, too - Around about the level I'd be expecting to hear on a competent power-metal album - clean, crisp and utterly in tune, but at the same time, they seemed perhaps a little bit unexciting. The various vocal tracks, with lead and backing vocals, are arranged quite thickly and ambitiously, but it doesn't seem to pay off at quite the monumental level which it could have done. All in all, the whole album feels like that. I know it's only part one, but at the same time, the album feels short, and lacking in definites - It feels too much like a collection of songs, as opposed to the larger-than-life and grandiose entity I see so many hailing it as. It just doesn't seem to be as monumental as I'd expected based on the hype. Beautiful? Yes, in places gorgeously so. Well written? Yes, rather. Monolithic and Iconic? No. Not really. Perhaps I'm mistaken for looking for that in it.


I listened to Wintersun so I could see what all of the fuss was about... but to be frank, I still don't quite get it. It's a good album, and I certainly enjoyed it's atmosphere - it's genuinely beautiful music, albeit in a style I don't naturally gravitate to anyway, but ultimately, I have to conclude that they hype is rather overblown, at least in my eyes. Then again, as the saying goes, I am a bit of a bastard.