It often takes me a while to think about what to review next, and for most of today, I had no idea at all what I would do. Fortunately, I remembered randomly discovering a thrash band called Hellcannon earlier in the year, and meaning to review them. I'd been reviewing a lot of thrash bands at the time though, and felt I should leave it for a while so there would be a degree of balance in the genres I review. I noticed to day that I've not reviewed any thrash this month. I listened to the album, and now, whilst listening again, I feel the time has come to review it. 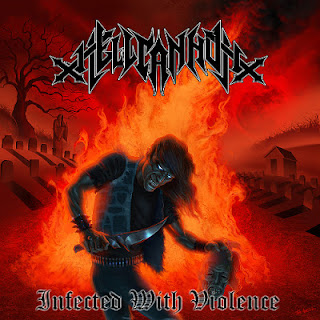 Hellcannon aren't a name I'd heard before in the thrash-metal world, so I had no idea what to expect. After a brief clean-intro, which left me thinking "this could turn out to be any kind of thrash at all", a powerful, Slayer-esque rolling riff viciously kicked the album into action; Hellcannon take their influence from the darker, more bloody side of the thrash metal coin, which is good to see, although I should certainly have predicted it from the Sarcofago style band logo. The music is darker, dirtier and has considerably sharper teeth than most of the rather pedestrian, traditional-sounding thrash-revival acts, with buzzing, ripping riffs with an unpolished tone reminiscent of Toxic Holocaust, Sodom, or indeed any band who opts for bare-metal, grease and rust covered production; not raw, by any means, but certainly with plenty of the beast left in, which is further emphasised by the rasping, black-thrash style vocals certainly make the bands allegiance with the dark-side known, with a harsh, but also ballsy and angry vocal style which fits in rather well with the general direction which the album takes. Indeed the direction is very definite, too, which is a good thing to see a relatively new band doing; They appear to know what their sound is, and where it's going, and the whole album is consistent, well-structured, and seems to be thought through somewhat. It's also near-enough the perfect length for a particularly intense thrash album, at least in my book - just over thirty-minutes.

Whilst gritty, Hellcannon seem to incorporate many of the less dark elements of thrash too - quite tastefully. There is the occasional riff which has a more traditional mood, composed of chunky, energetic bay-area style chords, and some very competent and highlighted solos (The one in Act of Violence is great), as opposed to the general roaring bloodlust, tremolos, and generally evil sounding guitar witchcraft, although the latter element  has a fairly large share of the albums sound.  Not to the extent to render the album an actual black-thrash work, perhaps - Hellcannon seem more a thrash band with a hint of churning chaos and darkness; The two bands I'm most reminded of by their sound are probably Toxic Holocaust and Slayer, the former for the combination of darkness and at times conventional guitar work, and the latter for both the guitar tone and the chaotic elements. One of the things I enjoyed about the album a lot, or indeed any album which does so, is the combination of demonic but also of human themes; supernatural songs go hand in hand with more human material, in a pleasing mixture which while consistently dark, is also diverse to a decent extent. Perhaps the band aren't taking the dark, caustic thrash sound anywhere especially new or uncharted, but as thrash-revival bands go, there's little doubt in my mind that they're a cut above the crowd, and what's more, the album is well written makes for a very complete feeling listen.


The albums artwork does a very good job of explaining what it's about, which is something I've always taken to be the mark of a good album. All in all, this is indeed a good album, and while to an extent it's been done before, not many bands have done it quite as well as Hellcannon.