I could sort of tell from the aesthetics, even before listening, that Loathsome's début full-length album, Born From Rot, was going to be filthy, toxic, greasy, and probably slightly inebriated. Then I started listening to it, and confirmed all of my suspicions and assumptions. Fortunately, metal of the filthy variety is something I'm very partial to, which made reviewing an album like this a constructive use of a Friday afternoon. 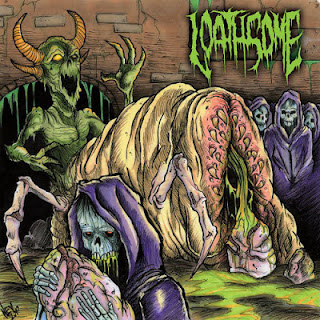 In the best possible way, Born From Rot is a construct so thoroughly filthy that it could probably give you an STI. Like the odd, devilish insectoid genital-looking creature on the artwork, the album is not only a twisted monstrosity, but also incorporates an interesting range of styles into itself. There's a lot to listen to on the album, with thrashy sections, and, the hallmark of decent filth, d-beats, scattered tastefully throughout, all united inside a death-metal shell. There were even some interesting doomy sections, which really gave the album some diversity in the tempo department. the riffs are frequently violent and abrupt, making the songs a real shakedown, sometimes with waves of blast-beats followed by slow-tempo, which give the music a manic edge, especially on songs like the opener, "Evolved from Slime." It's good to see that the whole band manage to play in diverse styles, too - it's not uncommon for bands to have, say, a vocalist who remains all too consistent through extremely disperate songs. Loathsome manage not to do this, with vocals filled with variety, from high rabid shrieks to low, fairly brutal growls and roars. The album as a whole is an extremely dynamic, but also smooth affair - it's got a lot of elements, but fortunately, the band have managed to make the unholy mass of influences all face the same direction, presumably with the clever use of cattle prods.

Production is an important aspect of any album, but it's finding the right production which matters, not the production's cleanliness or, as I tend to view it, sterility. In this respect, Loathsome have managed to find a production style which manages to match the dirtiness of their music pound-for-pound. It's extremely organic, or, to use simpler terms, sounds like it was recorded in someone's shed. The guitars, bass and vocals sound very natural, and the drums clatter away in a raw, unprocessed state, with nothing added to or taken away from the sound they made whilst they were being played. Nobody in the band, it seems, has any kind of OCD when it comes to production, and the album sounds all the better for it. Clearly, however, someone knew what they were doing, nonetheless - while deliciously raw, the production is well-handled, with the instruments sitting in the mix more-or-less where they should be, and the whole thing is solidly coherent. Perhaps one of the filthiest production jobs I've heard in quite a while. The tone and feel of Born From Rot really does do the job excellently, which is a testament both to the musicianship and the production - both work hand in hand to create what I can only call a fantastically rough sound. I hope that's what they were aiming at, and I've not offended them grievously.


Born From Rot really has been an album I've enjoyed listening to - as I've said countless times, I'm never quite sure how much I'm going to enjoy bands that I'm actively asked to review, but in this case, I can safely say it's been a hectic but thoroughly excellent musical barrage.