I've heard many people extolling the merits of young bands like Binah and Horrendous, and the picture they paint is one of excellent, and very old-school sounding bands. I always do my best to have a listen to the bands who are making waves, and in due course, I'll be examining both the aforementioned acts. Today is Binah's turn, for one reason; I happen to have their debut, and so far, only, album, sitting on the shelf, ready to spin. 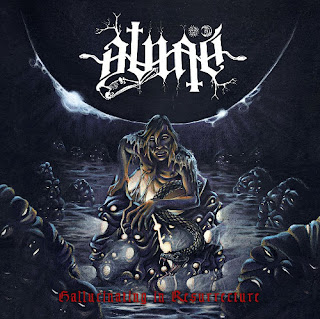 After a brief intro track, Hallucinating in Resurrecture bursts into life in the form of "Morbid Obumbration". The opening chord makes it sound a bit like the world is about to end, which, in extreme-metal circles, is very high praise indeed. This may sound confusing if, say, you're unfamiliar with extreme metal, but if that is the case, to paraphrase Samwise Gamgee "by rights [you] shouldn't even be here". The whole album has truly magnificently abrasive tone; the sound of tectonic plates grinding together and mountains being crushed upwards from the sea floor really makes the album have a truly apocalyptic tone, and I don't exaggerate when I say that, perhaps dueling for first place with Black Breath, this is the heaviest tone I've heard all year. Of course, it's what you do with the tone which counts, and it's safe to say that Binah must have had a few plans up their sleeve while they wrote this album. Crushing riffs are apparent from the onset, which, above and beyond being heavy, carry a noticeably dark, perhaps slightly occult feel, which is accentuated well by the sinister, but also at times beautiful, lead guitar, which gives the album as a very prominent atmosphere as well as a crushing backbone of rhythm, and roaring, monstrous vocals which really give the impression of a soundscape from an accursed eldritch temple.

In terms of intensity, this album is certainly near the top of it's class; the kind of album which makes the silence which commences when the last song ends feel almost shocking and suffocating after the barrage of guitar which came before it. The first time I listened to the album, it seemed to shoot past at lightning speed, and I couldn't remember much of it. On subsequent occasions, I hasten to say, it has got better and better; more of the hefty riffs become embedded in my mind, and there are plenty of those to choose from; there are, I'd estimate, at least a couple of "that's a tasty riff" moments per song, and they come in all shapes and sizes; head-imploding doomy riffs, and ones which race past like rabid shrapnel, in the vain of bands like Hail of Bullets, and every tempo in-between. The album is, without question, one for the riff-lovers, whilst at the same time, not being one-dimensional in the slightest; It may be a solid, and mainly old-school album, but its worth being open-minded to the fact that old-school death metal is far from an exhausted style, and Binah seem to be taking it in their own direction, whilst at the same time respecting the hallmarks of the style; Rumbling riffs, mixed tempos, and blast-beats used sparingly, which, if anything, makes them have more impact in the songs which they do appear, which is the way I've always enjoyed blast-beats the most.


Binah, so it seems, are a band I would urge anyone whose into old-school death metal to investigate; powerful, memorable, riff-laden, and with a hint of beauty, they come close to fitting all of the criteria I like to hear in death-metal. In the coming years, I feel they are going to be a band who make their presence felt, and I look forward to seeing it happen.