To the unsuspecting ear, Anaal Nathrakh's trademark rabid intensity can come as the musical equivalent of being kicked down the stairs. I can't claim to have listened to every Anaal Nathrakh album, yet, but I can safely say, as one of the bands I've discovered only fairly recently, and listened to the albums which I do own a lot, I was immediately interested to see what they had planned with "Vanitas". 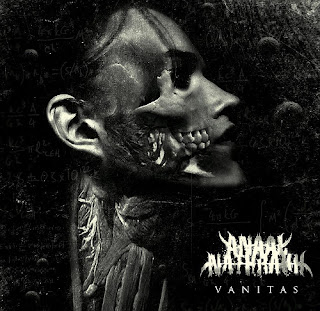 Anaal Nathrakh is, if you've been interested into extreme metal, and it's extremities, for any length of time, a name you'll probably have heard of. One of the reasons, as I see it, behind this, is the band's unique, instantly recognisable style, which is what attracted me to them in the first place. Of course, I'd imagine a lot of people are attracted for slightly superficial reasons, by the bands conception as one of the heaviest around, but that's certainly not what attracts me to the sound - I like it in it's own right. Like all of the material I've listened to, this album sounds like the sonic equivalent of being bludgeoned with a strobe-light. As far as I can recall, this is fairly similar to what I said when I reviewed "In the Constellation of the Black Widow" earlier this year, incidentally my first proper exposure to the band's sound. I'm reiterating the analogy for good reason, however, that being that it's still true for this album. Vanitas is rougher and more vicious than the previous couple of albums, with a more overtly dissonant and inaccessible approach to the material, and fewer clean vocals, creating an album which is not only terrifyingly bleak and dark, perhaps more-so than the last few, but also very accompanying of it's misanthropic and intense themes. The anthemic clean choruses, which I love, are fortunately not utterly extinct, but still have a place in a song or two, moments of clarity in the maelstrom of rage - in "Forging Towards the Sunset" for instance, the harsh but melodic chimaera of a chorus really fulfils the song. There are still a slew of melodies, too, which really keep the subtle beauty of the band strong, highlighting perhaps my favourite thing about the band - while the music has the sharpness and jarring feel of broken glass, it also shimmers like it - there's a lot of beauty in there too, and this album is no exception.

Anaal Nathrakh have always dabbled in the industrial and electronic spheres  - hints here and there, adding even more to their unique musical character. This album once again has it's fair share. What, as far as my limited knowledge allows me to speculate, appeared to be a dubstep intro on "Todos Somos Humanos" surprised and perhaps even alarmed me for a moment. When, however, I managed to get my overwhelming phobia of dubstep suppressed, I stood back and took stock; It sounds quirky and effective, and at the end of the day, I'm fairly confident that Anaal Nathrakh have more integrity than to create an Illud Divinum Insanus. As such, I'm probably safe to enjoy it as a thinking-out-of-the-box intro, as opposed to an omen of any negative kind. All in all, the industrial elements in the music are at a level where they don't become too intrusive, but noticeable enough to embellish the rest of the music nicely - in other words, just about where I like them to be.Vanitas seems to be the most complex, or, at least, most dynamic album that the band have done in a while, and certainly has more aspects than some of their work, although it's difficult to pick an Anaal Nathrakh album which isn't, at the very least, rather dynamic. Ultimately, Vanitas is cold, sharp, and vicious, which, as far as I'm concerned, means it's a success.


I feel a bit out of my depth trying to describe and evaluate this album, given my knowledge of the band's back-catalogue; there's still more that I haven't heard than that which I have - In time, when I've listened to all of it, I might have an entirely different take on what it is about this album which catches my attention, and which sets it apart. While that may change, however, my first impressions have been excellent.