I wasn't sure when I was going to review old-school death metal newcomers Horrendous, but I knew I planned to fairly soon. Tonight I'm tired, and because I needed something quite energetic and intense to wake me up a bit, and, judging by the effect that it has been having on my brain for the last couple of times I've listened to it, "The Chills" seems to be the very thing. 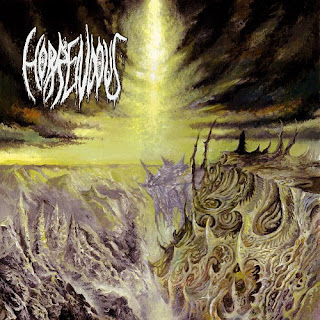 Much like Binah, who I took a listen to earlier in the month, Horrendous have a certain quality geared to blowing your head off the moment the album starts in earnest. The differences, however, are more appealing to me than the similarities between the two bands - comparing them, in truth, is probably the wrong way to go about anything. The Chills is an album full to the brim with an absolute multitude of old-school death metal characteristics, and aside from the subtle advances in production since the early nineties, could probably fit in quite well there; Roaring, energetic riffs, with that instantly recognisable death-metal hint of groove, and song structures which really encompass every tempo and stylistic avenue. The albums atmosphere is an interesting one, at times dark, ethereal and haunting, at other times hauntingly sinister, and at some taking a character much more akin to the ballsy death-metal sound of, for instance, a classic like "Scream Bloody Gore". The way in which Horrendous manage to reconcile the all purveying death-metal swagger and overt atmosphere is very much admirable, and results in an album which sounds great in terms of what it evokes and suggests with it's sounds, but also sounds like an album which the band had great fun writing and playing, but also one which is great fun to listen to, or, if you prefer, you can soak up the atmosphere and find it a very deep experience - The album is one which works on two levels very well, and I found myself alternating on a whim.

As I already mentioned, the album has very old-school leanings, and the vocals are no exception; I found myself enjoying them immensely, finding them coherent and complimentary of  the music which they give a voice too, but at the same time not overly-brutal, which may not have sounded quite as good. The style Horrendous use works really well for what Horrendous are aiming at with their sound, which is always a good thing to hear - nothing in the album sounds out of place. The level of cohesiveness on the record is, as such, very noticeable. The stand-out feature of the album, however, for me, is the lead-guitar, which really gives the band both a strong atmosphere, and, more often than not, very memorable songs, with hooks and solos which really get ingrained in the bit of your brain which is responsible for having songs stuck in it. Of course, one of the questions on my mind before listening to The Chills, or any new album which is of an older genre, was whether band have done to set the album apart from being simply re-hashed approximations of the cliché? It doesn't take long to work out that Horrendous definitely are more than that - the band's character is strong, fiercely so, and there's already no doubt in my mind that they're definitely not derivative - they take the established style, and on top of doing it well, really add their own secret seasoning to it, creating death-metal with a flavour which is unlike anything else I've listened to. It's really little wonder that the album is already being hailed as a gem.


It's always a pleasure to listen to an album which is, for want of a better phrase, "solid as a rock". The Chills is certainly such an album, and one I've been enjoying in it's own right for a few weeks already, before deciding to review it. I know I don't tend to write hugely negative reviews about anything, and I'm aware it's quite a flaw, when it comes to separating the good albums from the good albums, but I can safely say that The Chills is a cut above most of the things I extol the merits of - it's a fantastic record.