I've been a fan of Razorwyre's speed-metal antics for a while now, and I think I can safely say that their "Coming Out" EP is one of my all time favorite EPs. Consequently, I've been looking forward to the long-awaited full-length album for a while, and from the moment I found out that it had been released, I knew I'd be listening and reviewing imminently. 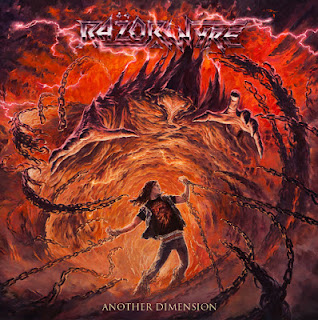 Sometimes, it can be a very good thing when a band follow up their previous work with "more of the same". Considering that this album does so, containing forty-five minutes of the same gritty, unpolished and thrashy speed-metal goodness which made me so enjoy the EP, I think its safe to say that this is such an instance. The songs contain the same spirit and good-old chunkiness, which is something it would be a great shame for the band to depart from, and the album certainly retains the catchy, ballsy and not-too-deadly-serious feel which the EP had. A little more refined, neat and adventurous, but at the same time notably consistent. One of the things which pleases me most, however, is that the band still sound as raucous as ever; some albums simply "feel" closer to live-material than others, and Another Dimension feels "alive", let alone simply "live" - there's a lot of passion and earthy, fist-pumping musicianship and energy, and not too much obsession with a smooth, "perfect" finish on the album's production, which renders the whole thing superbly real. The whole album captures and exudes the essence of the phrase "Fuck yeah", with an infections, speedy energy which few bands seem to compete with them on.

When I describe the album as "More of the same", Its probably worth mentioning that I don't mean the band haven't developed; The playing is tighter, more flexible and more intricate than ever before, but not in a way which changes the fundamental idea of what the band do, and have always done well. It's more that they are simply a honing and embellishing it. For me, the EP seemed to be about the tasty riffs and absurdly memorable hooks, and that's precisely what the album has too. There are increases in other areas, however; The lead guitar seems to be more fluid and indeed more present, and there are certainly more moments in which the lead guitar defines the path of a song, leading to a measure of both epic-atmosphere in places, some kick-ass and thoroughly memorable solos, and even more catchiness served all-round, without spoiling the music's raw and rough feel by making it seem pretentious or deliberately complicated. The album may be more more complex, but it's not any less filled with honest, down to earth and well-written music - I find that Razorwyre are the musical equivalent of a steak-pie; You know that it;s going to be reliable, and you know what it's going to be like - it'll really hit the spot, with no unexpected wankery.


A band like Razorwyre are the kind of band which could re-kindle anyone's faith in the old-school, but their music certainly isn't stale; This album is easily as good as their EP, and I would recommend it to anyone who likes speed-metal, thrash, or just plain old traditional metal. As far as I can tell, Razorwyre are one of my favourite exports from New Zealand.