I've been listening to black metal for years now, and I've explored many of it's aspects, through both well known and barely heard-of bands, but, and this will sound odd to you, I've never actually listened to any Immortal. In all probability, this is something which I should rectify, and do so with great haste, which is why, today, I decided to take a look at "Pure Holocaust", the band's second album. 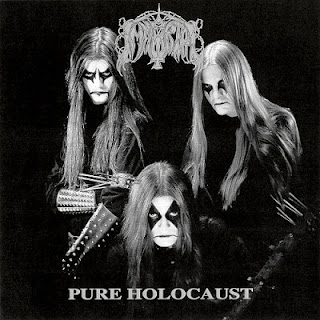 I can't really pinpoint a particular reason why I've never listened to Immortal before; I didn't even know what the music was going to sound like at all before I listened to the album, in fact.  Some things didn't surprise me, of course; The classic and very much old-school sound, especially on the drums, sound the epitome of early second-wave black-metal, albeit on occasion sounding like a flag flapping in a gale. Fortunately, the clatter of the percussion works well for it's raw context. The rawness, might I add, was greater  than I was expecting; I had somehow anticipated Immortal to sound quite smooth and refined, but it seems that the hiss of treble and wall of grim, cold noise much more pronounced than even the average black-metal of the time. Peeking from behind this, perhaps muffled to the point of requiring a level of concentration whilst listening, the riffs seemed to be very formidable - austere and very Norse sounding, which is the way I like my black-metal to be. Immortal may well, indeed, be one of the coldest, most icy black-metal bands I've run into in a while, which more emphasises the point that, on failing to listen to Immortal when first discovering the genre, I may well have missed some crucial musical education.

I found it an interesting activity, listening to something so sharp and cold - In a way, it was immediately appreciable that Immortal are quite unlike their peers; Without the orchestral and synth based elements of Enslaved or Emperor, colder than the comparatively warm rawness of Darkthrone, and lacking in the overtly occult feel of Mayhem. Immortal seem to be equipped with a majesty in their sound, soaring and riding through the music, that the others don't have in quite the same way; the riffs undulate and the crisp shrieks of Abbath really sets the music apart. I'm not saying I instantly prefer it, but I certainly find it to be noticeably different from the off; many of the nuances of black-metal are present, and done in a really quintessential manner, but in all probability, a lot of these were being set by Immortal, not followed; Pure Holocaust was released before both In The Nightside Eclipse, and De Mysteriis Dom Sathanas, the two albums which it reminds me most thoroughly of, which I think really says something about Immortals significance to what we know as black-metal today. It probably suggests that I should have listened to them sooner.

Once again, a band I've never listened to before turn out to be great; That's probably one of the things I love most about metal - the pleasant surprises and the sheer numbers of bands which are out there waiting to be listened to. I can safely say I'll probably be listening to Immortal again.