Variety, as they say, is the spice of life. I've always felt that it's important to explore the genres besides metal, and when I started out this blog, I claimed that I'd be reviewing "Metal, and even sometimes beyond". Looking back, I've done literally none of the latter, but now, I feel the time is good to dip my toes into some other genres. It wont be the majority, or even a notable minority, of the material I review, but the "That's not Metal!" feature is ideally going to make its appearance once a month or so.

The obvious difficulty for me, in reviewing non-metal albums, is that very often, I know absolutely nothing about what their respective genres are like, and people look for in them. Not wanting to give myself an easy start, the first album I've chosen to investigate is the début by English act And Also the Trees, from 1984. The Wikipedia article I hastily read earlier describes them as Post Punk. I'm not too sure what that is exactly, but I shall persevere and hope for the best. 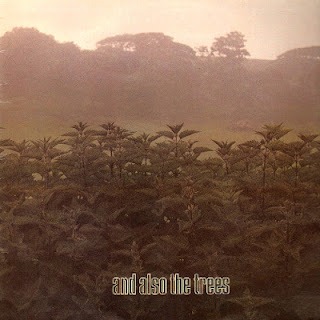 It probably says more than I'd like it to about the thinness of my knowledge of music when I confess that the closest thing I've ever heard to this kind of thing in my regular listening is Type O Negative. The connection, in all likelihood, lies in the Gothic elements to this albums sound, with deep, clean vocals, prominent synth, and a cold, but not caustic or malign, sense of darkness. The album manages to posses some absolutely quintessentially eighties bouncy synth-work, but at the same time tends to avoid being cheesy, or merry. Unlike the average eighties "new-wave" which I've encountered in my time, And Also the Trees seems to have a fairly noteworthy level of diversity - The catchier songs like "Midnight Garden" purveying what I enjoy about pop-like, almost upbeat new-wave music, albeit coming from a Gothic, almost vampiric sounding angle, which is why, I'm told, some refer to the style as "dark-wave". The spoken word track "Shrine" stands in stark, haunting contrast to it, showing the thoughtful and fascinatingly etherial nature of the band's other side. The record is, indeed, bedecked with a good degree of subtlety in many places - the synth has a natural and well-considered sound, providing more than simply a melody but suggestive of an atmosphere of great depth, which is one of the things I tend to look for in the use of synth.

It's always good to hear an album which can encompass a very broad spectrum and still manage to sound coherent, and this is certainly one of them, and it seems to me, limited though my knowledge may be, to be a very inventive and forward thinking album - While the album has no shortage of the trademark eighties sound, which to my generation, sounds like it's straight out of Vice City, the parts with an electronic sound which reminded me of genres like trip hop, which came along later, something which And Also the Trees seem to have been quite early-comers to - parts of the softer sections certainly reminded me of Massive Attack, although in good possibility, it's because they're the only electronic band I know much about. All things considered, and considering them took a lot longer than I was suspecting, because, as it turns out, I know almost nothing about things which aren't metal, I utterly enjoyed listening to this album - It genuinely surprises me that it's not a lot better known than it seems to be - it doesn't sound like the kind of music which need necessarily remain so underground to me. Then again, I suppose the phrase "cult-classic" was invented for situations like this. It's not a record full of hits, or catchy little tunes, but it's a record filled with thought, and sometimes, that's exactly what you need to listen to.

I found it quite hard to review this, and it really gave me the feeling which I had when I first started-out reviewing things at all - that of having no idea what to say. It's nostalgic, in it's way. I expect I shall review some more non-metal next month, and in the meanwhile, I'll try to cure my ignorance a bit.

I can't claim to know the style well, but I'll tentatively rate this 8/10.